The Meteor 350 is the best cruiser in its class, but has it met its match in the Yezdi Roadster?

The Royal Enfield Meteor 350 turned out to be the automotive equivalent of ‘making a splash and stealing the show’ when it was launched a couple of years ago. It blew existing ideas of what an RE can and should be out of the water and rose to becoming our segment favourite in no time. Cut to today and the Meteor finds a new challenger to its throne. Yezdi’s cruiser-style Roadster is new to the party and is more powerful, has a much different demeanour and costs roughly the same amount of cash. This is a tale of two legendary brands, with their most modern motorcycles going head to head.

Before we move further into the debate about which one of these is the better motorcycle, let’s set things straight. The reason we’ve got the Roadster and Meteor 350 together for a comparison and not the Royal Enfield Classic 350 is mainly because of the way the Yezdi has been designed. The Roadster is based on the Jawa platform, but with a more stretched-out chassis that has a longer wheelbase and more relaxed steering geometry. Even just going by the looks, Classic Legends is trying to give this bike more of a cruiser-y look and that’s why we decided to put it straight up against the cruiser rival from Royal Enfield.

Royal Enfield bowled us over with the Meteor 350’s design when it was launched a couple of years ago. And that holds true even today.

The bike has that typical cruiser stance; and bits like the round headlights, the large fuel tank, pod-like LED tail-light on the rear fender, and the dual tone paint on this Supernova variant are neat touches. Although the Meteor is the older bike here, it is quite the looker and has carved the identity of a cruiser in our minds.

Speaking of identity, the Roadster is a little lost in this department. There’s a bit of Jawa 42 going on in the design, somewhat expected considering this motorcycle is based on it, but we wish the Roadster had a bit of that Yezdiflavour. And I’m not just talking about the badging on the tank or the Faravahar on the rear fender.

With the passage of time, the Roadster’s design began to grow on me. The small LED headlight, the way the fenders are shaped and the matte green colour on our test bike are bits that I liked. 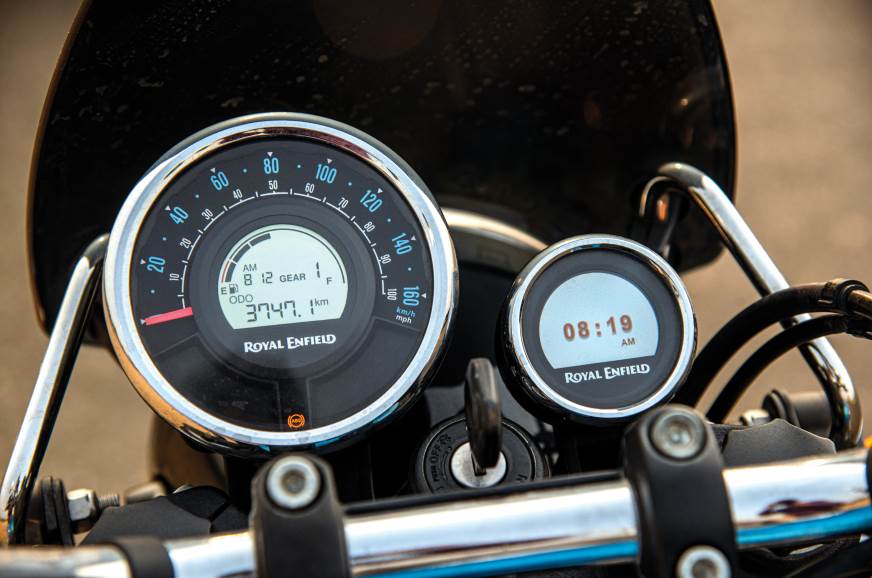 Neat RE cluster, but fuel gauge fluctuates below halfway mark.

But, as you step closer to the bike, you notice the shoddy quality in certain places. Some of the welds, for instance, are crude, the bolts look a little too basic, the switches aren’t as tactile as those on the Meteor and the flyscreen ahead of the instrument cluster was mounted crooked on our bike. Also, the LCD display is next to impossible to read when the sun is overhead. And if you are the fussy kind, you won’t like the fact that there’s a separate key slot to lock the handlebar. 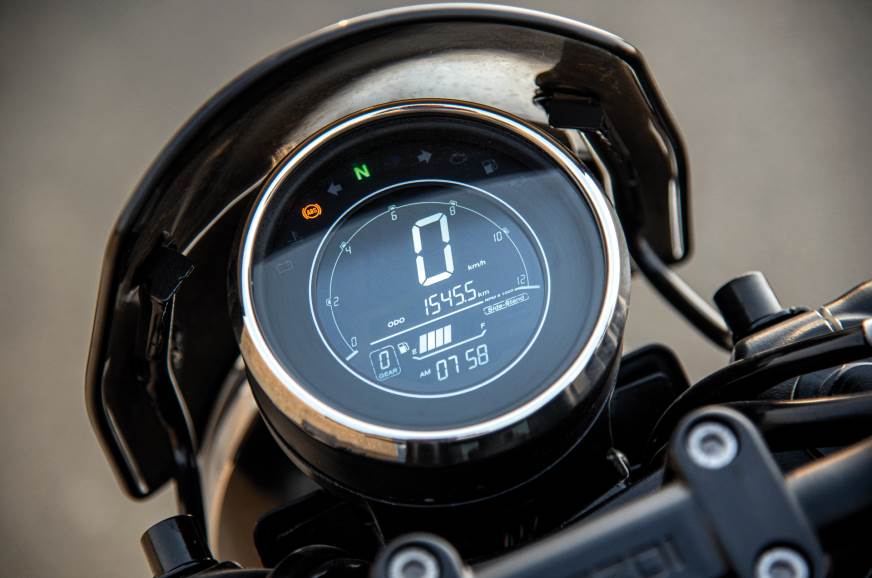 The Meteor, on the other hand, showcases Royal Enfield’s much longer experience and new found levels of engineering in putting together motorcycles. These new J-platform 350cc bikes in particular are a huge leap forward in terms of quality, fit and finish. However, the Royal Enfield isn’t free from niggles either. The Tripper Navigation system is buggy at times and the fuel gauge on the LCD fluctuates to random levels once below the halfway mark.

The Roadster’s riding position seems like a cross between that of a cruiser and a street naked. The handlebar is wide and pulled towards you, which feels nice, but the bar end mirrors kept fouling with our hands, especially while negotiating tight turns. Then there are the foot pegs that are higher and more rear-set than ideal. The position is strange, but not uncomfortable in itself. However, the seat is too soft and will lead to butt aches rather quickly. 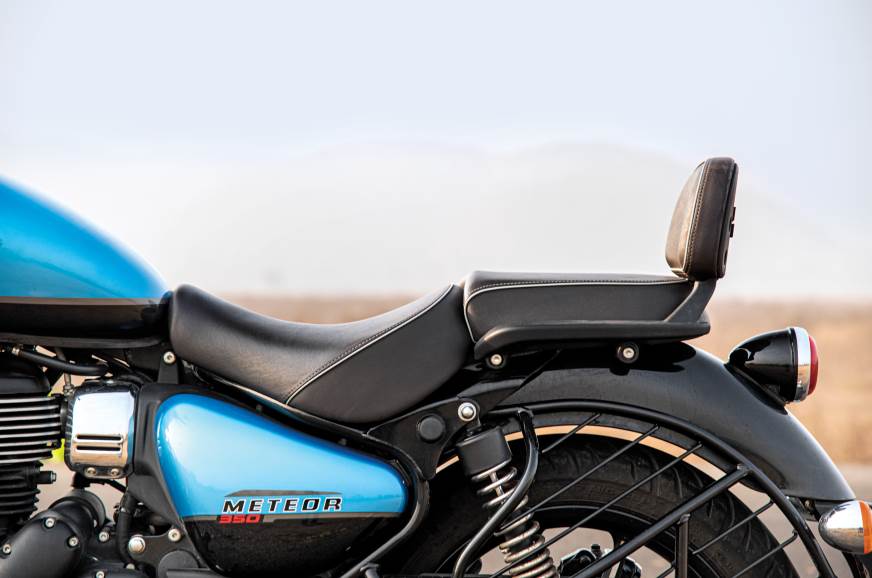 In contrast, the rider on theMeteor 350 is going to be much happier over the course of a long ride. Relatively speaking, this riding position feels more relaxed and natural at the same time, be it in the reach to the handlebar or the foot peg positioning. In fact, I once spent an entire day riding from Pune to Mangaluru on this bike and at the end of the ride, I had no significant pains or fatigue to speak of. 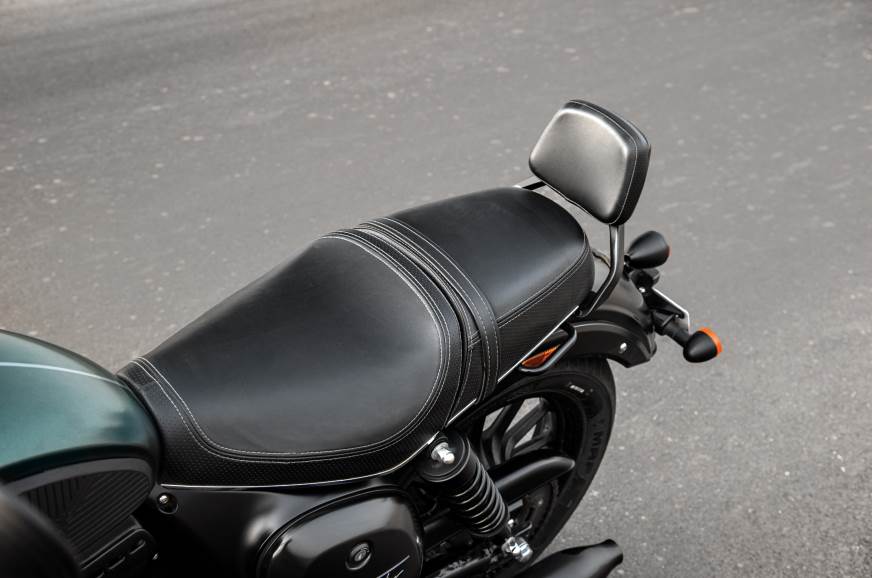 There’s no question about the fact that the Meteor 350 nails that crucial bit about long distance, all-day comfort. It’s also more comfortable for taller riders who will find the Yezdi’s seat-to-foot peg ratio quite cramped.

All said, the Roadster might not be as comfortable, but it will surely get you to your destination a lot quicker.

What you see on paper is made apparent when you ride these bikes. The Yezdi is head and shoulders above the Meteor 350 when it comes to acceleration or top speed.

The performance gulf between the two is evident the moment you get off the line and it widens as speeds rise, with the Meteor taking nearly 7sec more than the Roadster to cross 100kph. From this point onwards, the Royal Enfield’s performance begins to taper – while the Yezdi keeps pulling away and attains a much higher top speed of around an indicated 135kph, the RE won’t show you much more than 120kph. 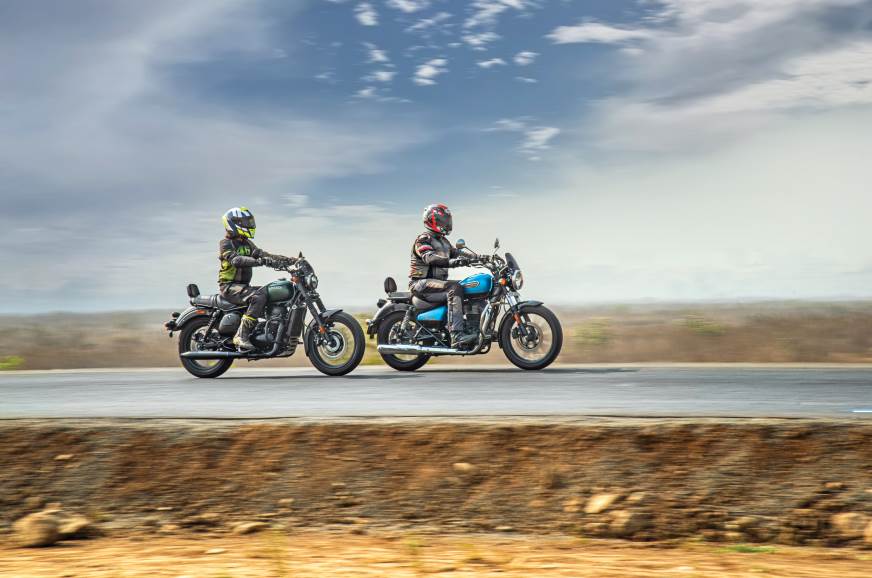 The Yezdi’s engine is the proper entertainer here, but all that performance advantage comes at the cost of fuel economy and refinement. Considering the Yezdi’s smaller tank and consequently lesser tank range, the rider on the Meteor won’t be stopping for fuel as often. In fact, we think that those riding the Meteor would hate stopping because the engine is so sublime, it makes you want to keep going on and on. It has a mild but characterful beat, there’s a lot of torque from low down the rev range and there are barely any vibrations, even at 100kph. It’s the engine’s easy nature that in turn removes the stress from a long ride, if you don’t mind travelling at a little more relaxed pace. When you do travel at such a pace, expect to see the fuel economy to hover around the 38kpl mark, which is 8kpl more than what the Yezdi managed.

In the end, it all boils down to how you like your engines.

As for me, there were times when I enjoyed the Yezdi’s peppy response and quick-shifting gearbox, while on the other hand, the Meteor’s soulful engine-gearbox combo put me in an almost meditative state. And then there’s the manner in which the Meteor negotiates corners.

An area where the Meteor well and truly leaves an impressive streak is in the way it handles.

The chassis is so well balanced and the front end is so communicative that all it takes is a couple of corners for you to have complete faith in the motorcycle. What aids confidence is the bike’s grippytyres, but I wish I could say the same for the dull and wooden feeling front brake. 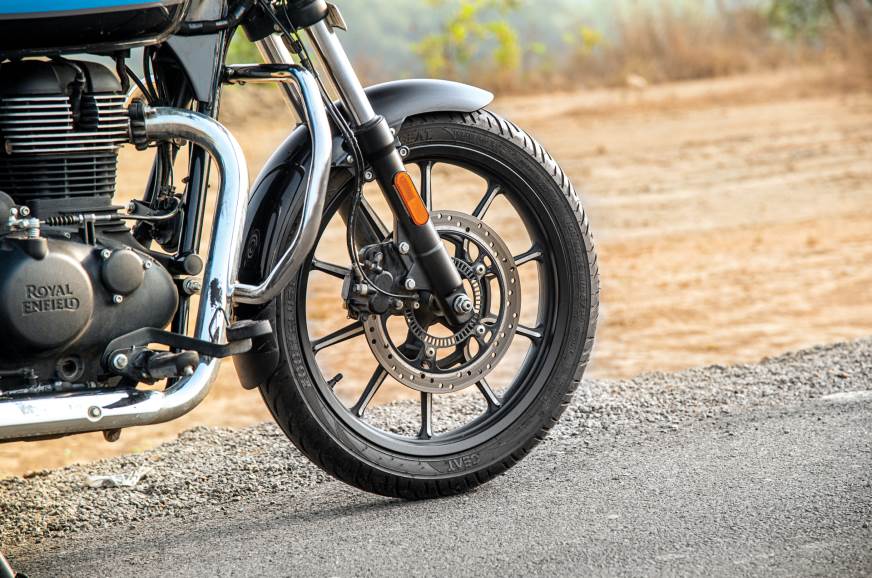 The Yezdi won’t throw any surprises while cornering. It has more cornering clearance even as it remains decently planted. In fact, with the extra clearance and the performance advantage, the Roadster will still be able to pull away from the Meteor in the bends. The problem, however, lies in its inability to establish the same sense of connection with the rider as the Meteor and the numb feeling from the front end only accentuates this. The bike does, however, redeem itself by offering stronger and more reassuring braking. 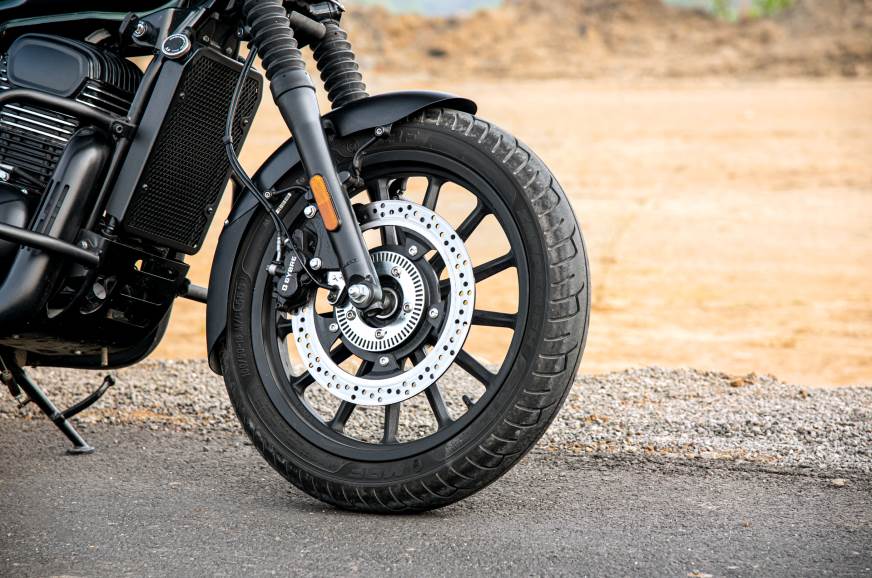 But where it can’t hold a candle to the Meteor is ride quality. It isn’t too harsh, but it isn’t great at isolating you from bumps and undulations either. In fact, over the period of a long trip, the Meteor’s relatively absorbent ride is bound to make you feel less tired.

After spending a considerable amount of time with these motorcycles, it is quite clear that they both bring their own unique motorcycling flavour to the table. Choosing one is going to largely depend on what suits your palate. 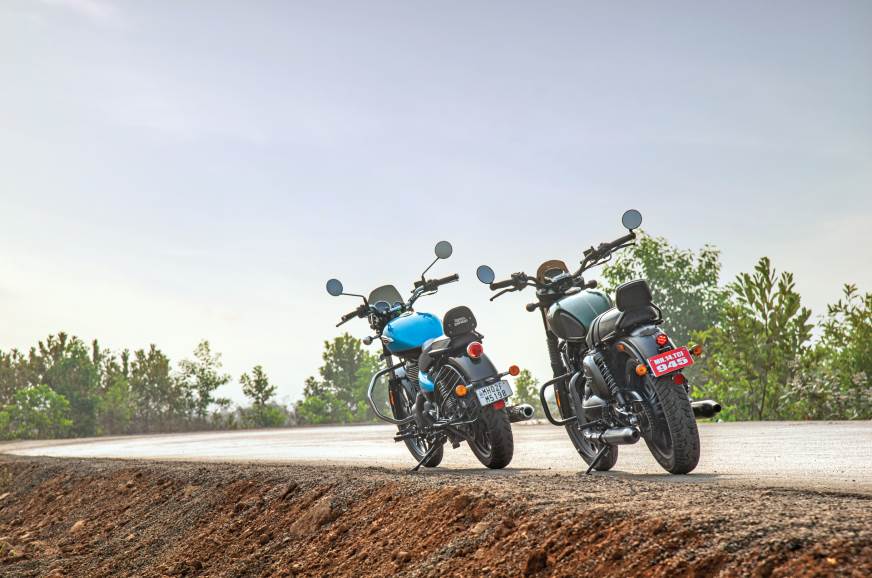 The Yezdi certainly has some rough edges that Classic Legends needs to iron out. But there are areas where the Roadster is quite enjoyable, especially if you largely care about riding the bike with more power and better performance. But the more time we spent with these two, the more the Meteor tugged at our heartstrings. It is far more refined, feels more special in its design, quality and finish, and it excels at offering a calm and relaxing ride. Not to mention the advantages that Royal Enfield’s giant sales and service network offers.

As far as prices go, the Meteor’s fully loaded Supernova variant you see here with its windscreen, backrest and dual-tone colour scheme costs about Rs 20,000 more than the Yezdi. But the base Meteor, which is mechanically identical, is just Rs 3,000 more than the Hunter Green Yezdi we have here. Which variant you buy is a personal choice, but in a direct comparison, the Royal Enfield is the one we’d choose.