New Delhi: The intense second wave of Covid-19 infection and the subsequent regional lockdowns will limit growth in the domestic commercial vehicle (CV) sales volume to 23%-28% this fiscal from the earlier projection of 32%-37% expected prior to its onset, credit rating agency Crisil said in a report on Monday.

However, the agency expects recovery in demand from the second quarter with easing lockdowns and pace of vaccinations picking up.

In the previous fiscal, the volume growth had hard-braked to a decadal low largely on the back of subdued freight availability along with the pandemic impact. According to the credit rating firm the CV market saw two consecutive fiscals of steep volume decline of 29% and 21% in 2020 and 2021, respectively, following multiple headwinds such as revised axle norms, BS-VI transition, and the pandemic.

With lockdowns becoming widespread in May, freight movement, and consequently the profitability of fleet operators, would remain under pressure, weighing on demand at least in the first quarter, Crisil said in a release.

It however expects that as lockdowns ease from the second quarter, freight demand and rates could normalise, aiding demand for CVs. Crisil also said that credit metrics of CV makers are expected to improve as margins expand on better capacity utilisation and product mix. 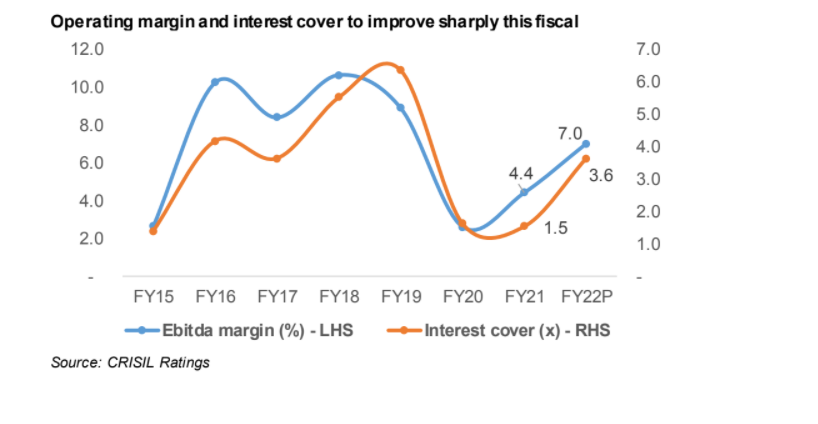 According to Hetal Gandhi, director, CRISIL Research, the MHCV volume, which was hurt more in the past two fiscal years, should see a strong 35-40% growth this fiscal, driven by the government’s infrastructure thrust and revival in economic activity.

She further said LCVs could grow 15-20% given continued last-mile demand from e-commerce, consumer staples and the replacement market.

“Demand for buses – the segment hit the hardest because of schools shutting and lack of demand from state transport undertakings and corporates – should grow 67%-72%, but will remain at multi-year lows. Overall CV volume would still be about 30% below fiscal 2019 level,” Gandhi added.

Crisil noted that OEMs are unlikely to get a fillip from wholesale push because inventories at dealers were at fairly elevated levels of 35- 40 days as of end-March (against normal levels of 25-30 days). Inventories had risen sharply in the second half after near-zero inventory at the beginning of last fiscal due to the BS-VI transition, it added.

Highlighting one positive factor the agency said, revenue growth versus volumes will be in the fast lane this year. Better product mix due to higher sales of costlier MHCVs compared with LCVs would provide a fillip to average realisations, it added.

On the commodity cost front Crisil said, Raw material cost inflation, particularly in the form of steel prices, is expected to be largely passed on to consumers, similar to last fiscal which saw 10-15% price increases due to both BS-VI and commodity inflation.

“Higher revenue, coupled with improved capacity utilisation (up from ~38% to ~45%) and control on fixed costs, should help CV makers improve operating margin this year to about 7%,” Naveen Vaidyanathan, associate director, Crisil Ratings, said.

He further mentioned last year, players had eked out an operating margin of 4.4% despite decadal-low volume due to significant operational improvements and reduction of fixed costs.

Crisil noted that with improved profitability, capex – cut sharply last year – should more than double this year to normal levels. Nevertheless, higher profitability would drive free cash flow generation and help lower debt. It expects recovery in demand from the second quarter with easing lockdowns and pace of vaccinations picking up. A third wave of Covid-19 could further dampen sentiment, and will be a key monitorable, too, the agency pointed out.