MUMBAI: Consumer confidence in India has slumped to the lowest level since the Reserve Bank of India (RBI) started measuring it through surveys in 2016, while the consumer outlook on the economy and employment have worsened against the backdrop of the ravaging impact of second wave of the Covid-19 pandemic.

RBI’s Current Situation Index, which reflects responses of citizens to how they see themselves currently placed with respect to employment, prices, income, and spending compared to a year ago, has been negative (pessimistic) since July 2019. In May 2021, perceptions fell to an all-time low.

Indians have for the second time turned pessimistic about the future which is reflected in the Future Expectation Index dipping into negative territory. The index takes into account perceptions about the general economic situation, employment scenario and household income over a one-year horizon. The last time Indians had turned negative about the future was in May 2020 as Covid-19 lockdowns were extended and the pandemic spread. 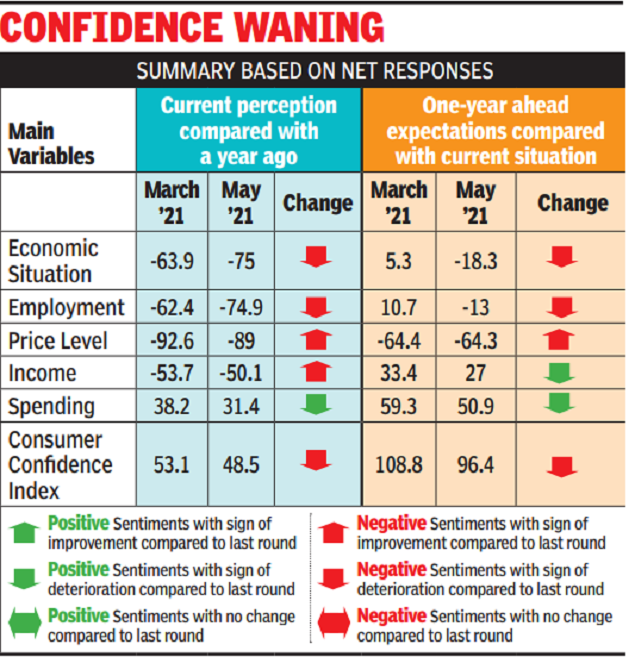 While the worsening sentiment can be attributed to the second wave of the pandemic, consumer confidence had taken a hit in March as well. In the survey two months ago, consumers were pessimistic on all parameters except spending. They are still positive about spending, but much less compared to two months earlier.

According to economists, the weakening of demand is one of the reasons why the monetary policy committee chose to ignore inflationary pressures arising out of the surge in global commodities prices. According to the RBI, inflation becomes sustained only if it is backed by demand.

RBI has pointed out that household spending has weakened in the latest survey round with even essential spending showing signs of moderation while non-essential spending continues to contract. While 71% of the respondents had said that spending on essentials had gone up in March 2021, only 63% saw increased spending in May.