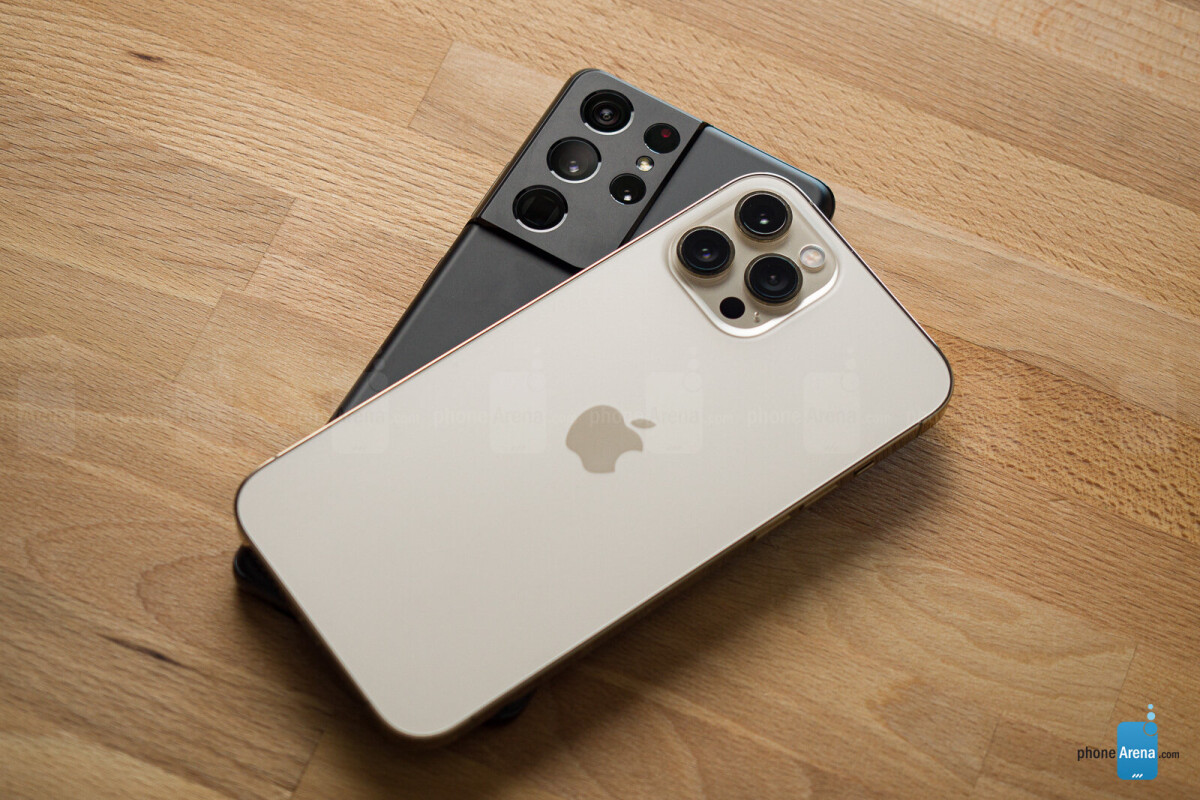 With a fast, 120Hz refresh rate the Galaxy has the smoother moves

Both the Galaxy S21 Ultra and iPhone 12 Pro Max have extra large screens that produce beautiful colors without much of a drop in quality when you view the screen at an angle, plus both of them get much brighter than your average phone so you can comfortably use them outdoors.

On paper, it is the Galaxy that has the slightly bigger screen. The difference of 0.1 inches, however, is barely noticeable, and these two are clearly stretching the limits of how big a screen you can get in a non-foldable phone.

For the screen nerds, here are the display specs for each of the phones:

One signature iPhone screen element remains the notch, which houses its complex Face ID sensors and front camera, while the Galaxy S21 features a much more discrete punch hole front camera that doesn’t obstruct your view. It’s easy to get used to the iPhone notch in everyday, casual use, but it can be very noticeable when you watch videos and particularly when you play games.

The Galaxy has a different peculiarity: a slightly tapered screen compared to the flat one on the iPhone. The tapered screen makes for easier swiping motion and it also helps achieve a thinner bezel-look for a more futuristic, all-screen appearance.

The Samsung has a couple of other advantages too: its screen has a slightly higher resolution which results in sharper detail. Don’t expect the iPhone to look pixelized in any way, instead expect to see a slight difference in favor of the Galaxy if you really look up close. Most importantly, the screen on the Galaxy can run at a 120Hz refresh rate, twice as fast as the 60Hz on the iPhone, and this makes scrolling zippier and smoother than on the iPhone. New on the Galaxy is that this fast refresh rate can be used at the full resolution, plus the screen will automatically adjust the refresh rate, so the max 120Hz speed will be used only when needed, while the rest of the time the screen can smartly switch to a lower and more power-efficient refresh rate (as low as 10Hz).

And here are our display measurements for each of these screens:

The only slight privilege the iPhone offers is the smoother touch responsiveness of iOS that doesn’t “jump” the screen a tad when you put on or lift off your finger.

In all of the important display quality aspects, however, Samsung has the lead and if you are really picky about your screen, the Galaxy is the better one.

Plus, the S21 Ultra adds a digitizer for S Pen support, a neat extra.

The Galaxy S21 Ultra comes equipped with the latest and most powerful Qualcomm Snapdragon 888 chip in the United States, while international models will ship with a Samsung-made Exynos 2100 processor, which this year is expected to finally match the Snapdragon in both performance and power efficiency. On the other hand, the iPhone 12 Pro Max uses the Apple A14 Bionic chip.

Both manufacturers use the most advanced technology available for these processors: 5nm manufacturing, so no difference on that end. Still, Apple’s A14 chip has a notable advantage in both single-core and multi-core performance.

Interestingly, the graphics performance on both chips is quite similar. In the GFXBench Car Chase on-screen test that we performed at 1080p resolution, both scored nearly the same.

In terms of storage, the base Galaxy S21 Ultra model starts at 128GB of on-board memory, matching the storage offered on the iPhone 12 Pro Max. The Galaxy S21 is also skipping the microSD card slot for the first time on a Galaxy flagship, so now it is just like the iPhone, with NO way to expand the storage… unless you buy a pricier version with more storage from the get-to.

Of course, both phones are available on all major carriers across the globe and in the United States, and they support 5G connectivity with all bands required. In the US, both support the sub-6GHz and mmWave types of 5G.

This test will be of particular interest to gamers. While most benchmark only run for a couple of minutes, the 3D Mark Wildlife benchmark loops for 20 minutes, which allows users to to see whether the chips inside the phones will throttle after a while, a behavior that you don’t catch with other benchmarks. Indeed, we see that the Exynos 2100 chip inside the S21 Ultra throttles in a big way around the 15th minute of the test, losing around 30% of its initial performance. Not only that, the temperature grows to a quite hot 42° C.

At the same time, the iPhone 12 Pro Max has a huge burst in performance in the very first test run, and then quickly scales back by around 25%, around the 3rd minute of the test, and from there on it runs at that steady pace.

And just looking at the frame rate of the benchmark towards the end of the test, the iPhone runs at a steady 30+ fps, while the Galaxy averages a bit over 20fps, so that is a significant difference in favor of the iPhone.

Two telephoto zoom cameras on the Galaxy might make it the most versatile zoom camera, but only the iPhone has a LiDAR sensor for AR

The Galaxy S21 Ultra brings a new style to the camera unit which now blends with the side of the phone, while the iPhone features that recognizable stove top like design for the cameras. Both are very distinct and easily recognizable, but also both feature raised camera beds, so both phones will wobble if you lay them back down on a table without a case.

Apart from the styling differences, there are some big differences in the amount and specs of the cameras.

The Galaxy has the upper hand with two telephoto cameras, while the iPhone only has one zoom camera.

On the Galaxy, you get a periscope lens, with a long-range, 10X zoom capability, and then, you also have a secondary zoom camera, this one being a short-range 3X zoom lens. Combined together, these two cameras make the Galaxy clearly the superior phone for when you have to get a clear picture of something far away.

Here are the detailed camera specs:

Notice that the Galaxy has a wider main camera. It uses a 24mm lens versus a 26mm lens on the iPhone (and most other phones for that matter). This might not sound like a huge difference, but it will result in a wider perspective.

*Notice the iPhone has cleaner detail around the helm of the boat, but the Galaxy has a wider field of view

The most impressive feature of the Galaxy has got to be its zooming ability, so let’s see how it compares against the iPhone:

That really is one world of a difference, the Galaxy truly impresses here. Next up, let’s take a look at a real challenge, low-light photos! Keep in mind that the photos below were captured using auto mode with Scene Optimizer enabled on the Galaxy and we have also used the Auto mode on the iPhone.

On the video side, the S21 Ultra also adds 8K video recording at 24fps, while the iPhone 12 Pro Max can do 4K video but it supports the Dolby HDR standard for richer colors. With 8K you get much cleaner detail, while the HDR option on the iPhone gives you a higher dynamic range, so both have their own unique advantages. Those are the technical differences. In real life, recording at 4K, we noticed the iPhone still has the higher dynamic range, especially in challenging situation it stands out, and also, in extreme low light the Galaxy fails to squeeze out enough light and videos on it appear way too dark. However, it would be short sighted to just give the iPhone the win because it is just not a match for the Galaxy in terms of zooming! The iPhone can only go to 12X zoom in videos, while the Galaxy can go all the way to 20X, and it’s the quality that matters, you can get incredible shots on the Galaxy with the 10X zoom periscope lens, while at the same magnification… well, let’s just say you don’t really want to zoom that far on the iPhone.

Finally, these two also differ in their battery sizes. Android phones like the Galaxy S21 Ultra always come with bigger batteries than iPhones, and the S21 Ultra is no exception. It’s projected to come with a 5,000mAh battery cell, compared to a 3,687mAh battery on the iPhone. That means the Galaxy has a nearly 50% larger battery capacity than the iPhone!

In real world use, we were getting north of 7 hours of screen time on the S21 Ultra, a bit more impressive than the iPhone, but to confirm that, we turn to our scientific battery tests!

On our lightest test, web browsing, the S21 Ultra outlasted the iPhone even when it was running at the 120Hz Adaptive rate, which is a truly impressive achievement. We definitely recommend that smoother and more pleasing 120Hz mode, especially with such great battery life, but if you switch to 60Hz, you will indeed squeeze a bit more on this test. At 60Hz the S21 Ultra scored more than 16 hours, an all-time record for flagships!

Our second test is streaming YouTube videos from the same playlist at the same, 1080p quality, and lo and behold, the S21 Ultra once again beats the iPhone with a small margin. Great showing for the Samsung and its battery so far.

Last but not least, we have our gaming test, and if you play games like Call of Duty and Minecraft, this is the number one test that you should care about. While the other two tests load up the CPU, this one strains the GPU and shows how effective it is.

And once again, the Galaxy with outlasts the iPhone with a bit extra running time at 60Hz, but keep in mind that using 120Hz for gaming really hits the battery hard and you get nearly half the battery life you would get otherwise at just 5 hours of playtime at 120Hz. If you want a balance between performance and battery life, it really makes sense to game at 60Hz.

For charging, the iPhone 12 Pro Max supports speeds of up to 20W, while the Galaxy S21 Ultra is expected to support marginally faster, 25W charging speeds. The iPhone was also the first mainstream phone on the market to ship without a charger, and the S21 Ultra is the first major Android phone to follow this unfortunate move.

Unfortunately, that means that these two premium flagship are behind the curve in charging times. It takes about an hour and a half to fully charge the S21 Ultra with a 25W charger, while using a 18W/20W charger on the iPhone takes up around 1 hour and 45 minutes. In times when phones charge at under an hour, and some can fully charge in half an hour, those speeds are just way too slow.

What the iPhone cannot do is reverse wireless charging, while the Samsung does have this option so you can place your Galaxy Buds Pro for example and quickly top them up using your Galaxy phone as a wireless power bank of sorts.

Last but not least, let’s talk pricing. Market conditions this year have forced Samsung to lower its flagship phone prices. In 2020, Samsung launched its flagship S20 Ultra at an exorbitant price of $1,400, while this year’s Galaxy S21 Ultra start at a more reasonable price starting at $1,200, which is still a bit more expensive than an iPhone 12 Pro Max.

Below, you will see the MSRP for both phones, but keep in mind that the Galaxy is commonly discounted and can be found for as low as $1,000 while price cuts for the iPhone are hard to come by, so chances are that you can get your Galaxy for a slightly lower price than an iPhone.