New Delhi: Automobile OEMs have reported a sharp decline in sales, both month-on-month and on yearly basis across all segments in May 2021 due to muted demand amid rising COVID-19 cases.

Temporary shutdown of dealerships because of lockdown restrictions has drastically reduced enquiries as customers postpone their purchases.

The Federation of Automobile Dealers Associations (FADA), which collected vehicle registration data from 1,294 out of the 1,497 regional transport offices (RTOs), reported on Thursday that passenger vehicle (PV) retail sales in May 2021 had a sequential decline of 58.9% to 85,733 units, as registrations slowed down owing to supply issues, against 2,08,883 units. in April. This segment was hit hard also on account of supply chain constraints and shortage of semiconductors. 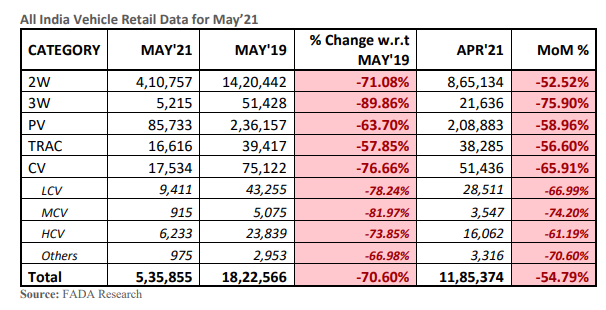 He also emphasized that the auto retail fraternity is in dire need of support. While a handful of OEMs (Tata Motors – CV, Renault, Bharat Benz and HMSI) have announced financial help to their channel partners, others are yet to do so, he said. “Hence, FADA humbly requests all those OEMs which have still not announced any financial assistance to kindly do it urgently,” Gulati added.

FADA appealed to the Union Government that instead of restructuring, banks should allow a moratorium of 90 days to all categories of dealers without keeping a turnover limit. “This is required as the auto retail trade works on the principle where dealers get funded from banks and financial institutions in terms of inventory funding for a period of 30-45 days (varies from bank to bank) to purchase vehicles from the OEMs,” he added.

On the outlook, FADA president said the first nine days of June have seen better than expected for retails due to the pent-up demand which was there in the system when states started implementing lockdowns. “If the trend continues, we may see almost the same sales as in June 2020,” he added.