Despite being a large three-row SUV, our new long-termer, the Hyundai Alcazar, has been a thrilling daily city commuter.

Diesel-manual. That’s my favourite combination for a long-term car. With a 75km home-to-office round trip and all of it through Mumbai’s traffic, efficiency is what my wallet really needs. And so, despite it being a large three-row SUV, I grabbed the keys to the Alcazar no sooner than it showed up at our office.

Already familiar with the Hyundai diesel engine and its super frugality in the Creta diesel-manual that was in our fleet earlier, I was keen to see how the larger Alcazar would perform. Straight off the bat, it didn’t disappoint; despite being heavier, efficiency was excellent at 12.82kpl in the city, and while that’s lower than the Creta’s efficiency, which never dipped below the 15kpl in the time I used it, it’s impressively not too far off the mark.

Of course, it’s longer than the Creta and you do feel that extra length from behind the wheel. It’s not like I ever felt I was driving the Creta, but hey, with that incredible fuel efficiency, I still steadfastly use the Alcazar as my daily driver. Besides, on the weekends, the family really loves it and the extra pair of seats comes in handy when going out with friends or family. A big hit is that second row with the captain seats, centre console and the folding trays – my kids simply love that and charge their phones on the rear console. 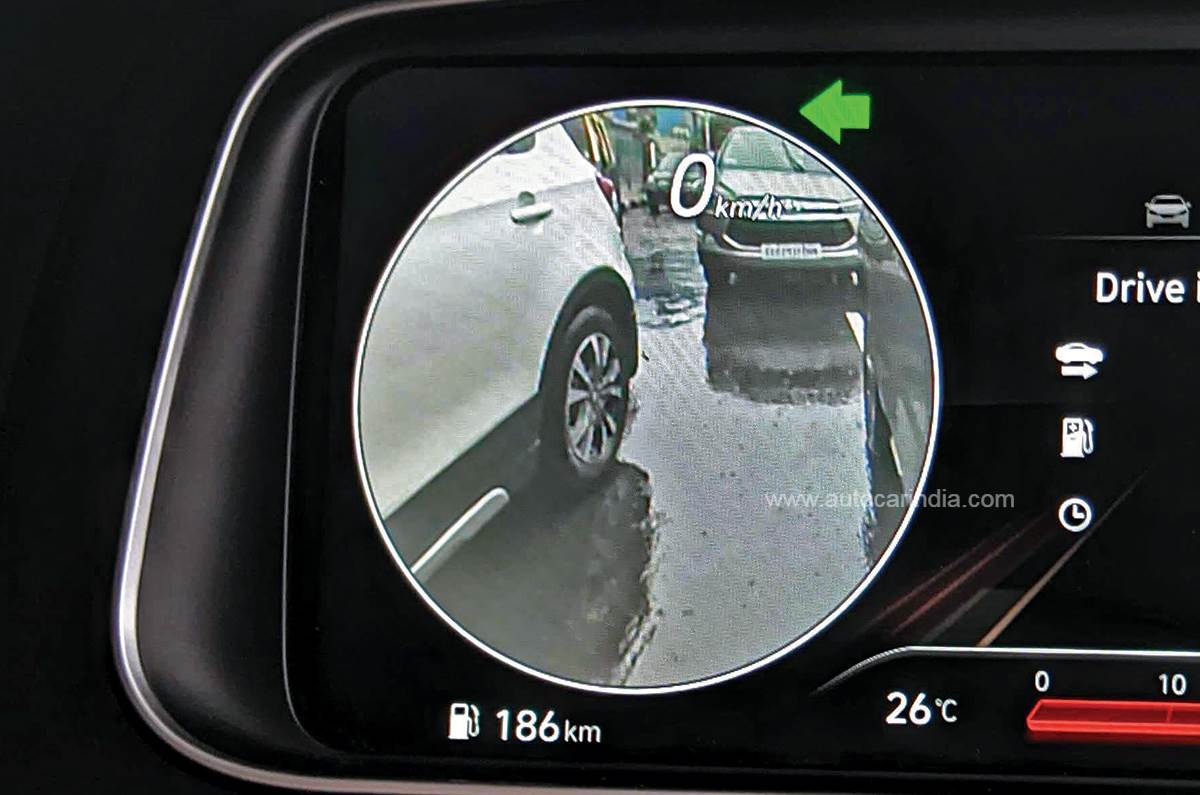 CLEAN SIGHT: Rain drops flow around the camera giving you a clear view.

I think they very often just feign hunger so that they can eat in the car on those trays. Sleep, too, seems to come quite easily for them and the reclining second row does its job very well. It’s not cooled like the front row, and that’s a pity as it’s a handy feature on a hot day. Doesn’t help when my wife and I turn the feature on and the kids look on longingly.

That aside though, the second row is easily amongst the best around, and although that console means you can’t simply walk-through to the third row, when the kids are relegated there, they don’t seem to mind and simply climb over. Of course, you can flip the seats forward quite easily too, but try explaining that to kids – climbing over is more fun. 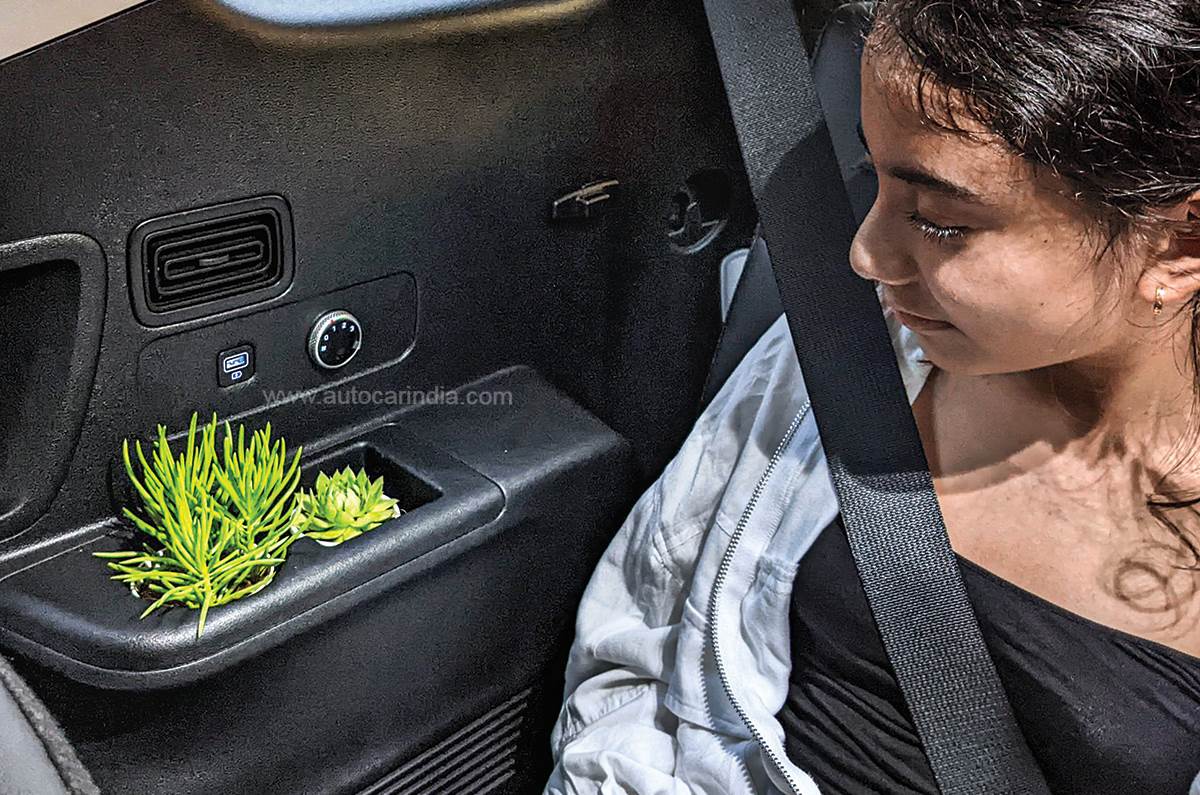 UTILITY FOR ALL: Blower controls, cupholders and USB slots in the third row.

In the third row, space isn’t great for adults, but its fine for kids, especially on short journeys in the city. What’s also nice is that there’s a blower control as well as USB slots, which my daughter did approve of. The view outside though, not so much, as the glass area is small and you are sat quite low.

While I’m on the topic of things I didn’t like, I have to mention the tyre pressure monitoring system. As with most Hyundais and Kias we’ve had, they certainly have some gremlins. For a long time, the front right tyre would show a low pressure warning even when the pressure was at the recommended level, but just like that, overinflating them by 3 PSI one day seemed to cure the problem. The car was also sent in for a service and after that the problem seems to be gone for good. Fingers crossed. 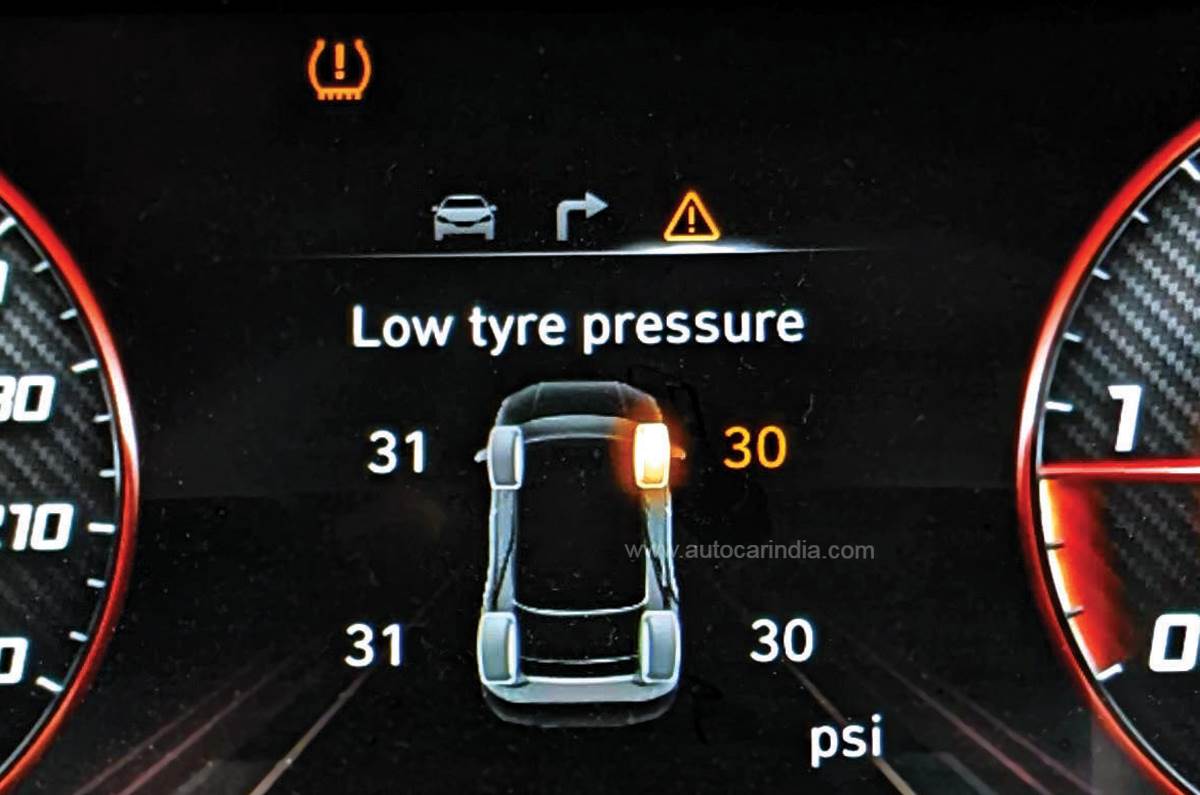 Speaking of servicing, it was a regular scheduled one, but I have to say to the dealer, please lay off the interior polish. Everything was covered in a very greasy polish – steering wheel, gear knob, dashboard, and even the foot mats, which were extremely slippery. We had to wipe it all off with a cloth.

That done, the Alcazar continues to impress and the ride too is something everyone at home likes. When we had it with us, the new Creta didn’t bob about on its soft suspension like the earlier Creta did, and it’s much the same with the Alcazar, which has the same taut body control, so car sickness isn’t a worry for my daughter. 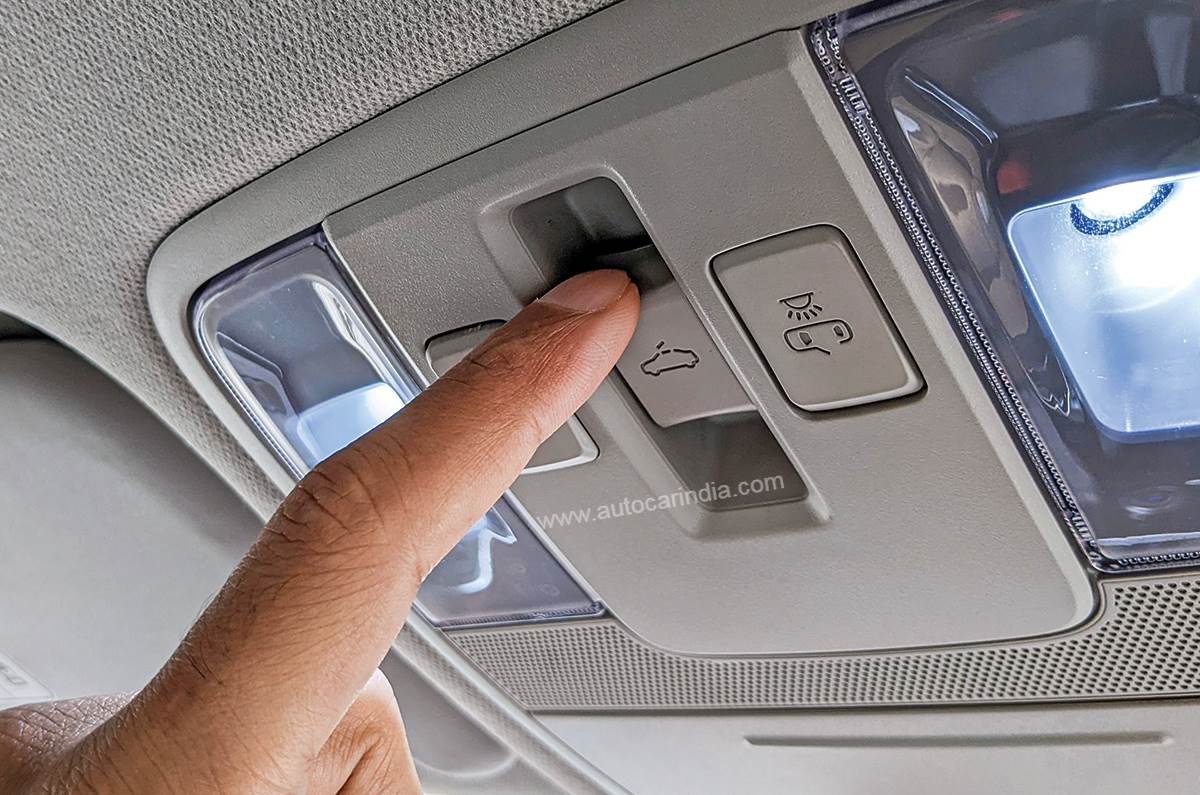 FIDGET SPINNER: Single button for sunroof is not intuitive to use.

The Alcazar also did well picking up my mother-in-law returning from Dubai. With six seats, all four of us could go to pick her up – which she loves – and with one of the third row seats down, the ample shopping luggage – which we love – was easily managed. So, as things stand, the Alcazar is really doing a great job as my daily and weekend driver. An automatic would certainly be more convenient, and, in traffic,

I sometimes do wish for one. But with fuel prices still sky high, saving every last bit is the name of the game for me and so I’m sure I’ll be hanging on to the Alcazar’s keys for longer still.