Smooth highways, winding mountain roads, and even narrow streets. We take the Honda City, City Hybrid and Amaze on a memorable journey through southern India.

An early flag-off gave us time to explore the streets of Bengaluru. When I was first asked if I would like to attend Honda’s annual drive event, I answered with an enthusiastic yes. It was my first time attending the Honda Drive to Discover tour – now in its 11th edition, this time a road trip from Bengaluru to Kochi – and goes without saying, I was excited.

Day 1: Journey to Madikeri in the City

It all began with me being courteously picked up by the event-arranged driver for the rather early 7.35am flight. Things seemed bleak at first – the rains in Mumbai got increasingly worse, making me nervous for the very first time, while waiting for the plane to take off. But once we soared above the dark, foreboding clouds, the clear skies calmed my nerves down, finally allowing me to catch up on some much-needed shut-eye until the flight touched down at Bengaluru airport. 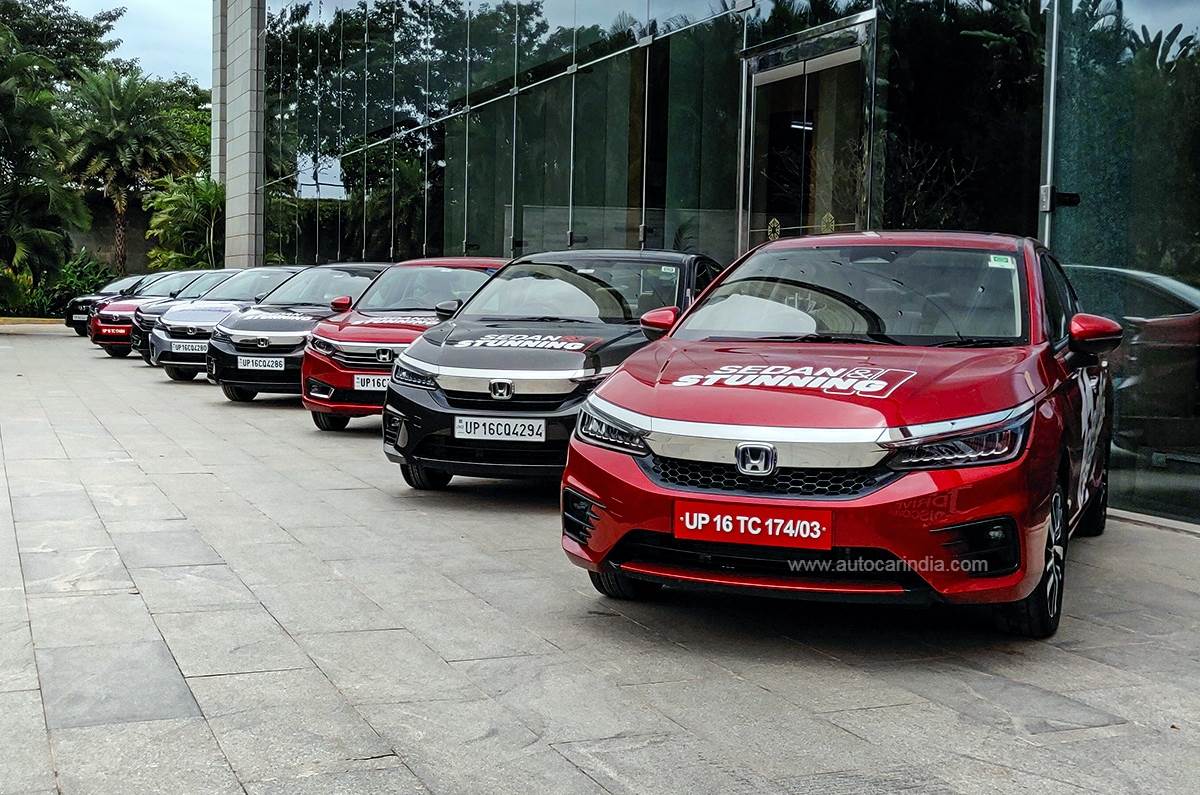 The reason behind the drive being named ‘Sedan and Stunning’.

The trip’s designated starting point was the Taj Hotel near the airport; all participants had assembled there, along with the entire line-up of Honda sedans (City, Amaze and City Hybrid). Post a quick breakfast, a detailed presentation introduced us to the drive’s theme – Sedan and Stunning – as well as the complete itinerary and timeline.

Once paired with my driving partner, a City petrol manual was assigned to us for Day 1. With the drive now officially underway, all of us were given the liberty to explore our own routes to reach the designated location, the Green Tree Restaurant, which was three hours away. I took the wheel, traversing through Bengaluru’s interior roads and heading towards NH75, and noticed something familiar about the City manual. Like the 2006 City ZX that I owned, this Gen 5 City too showcased the ability to serve up power in any gear, reducing the need for frequent gear changes. 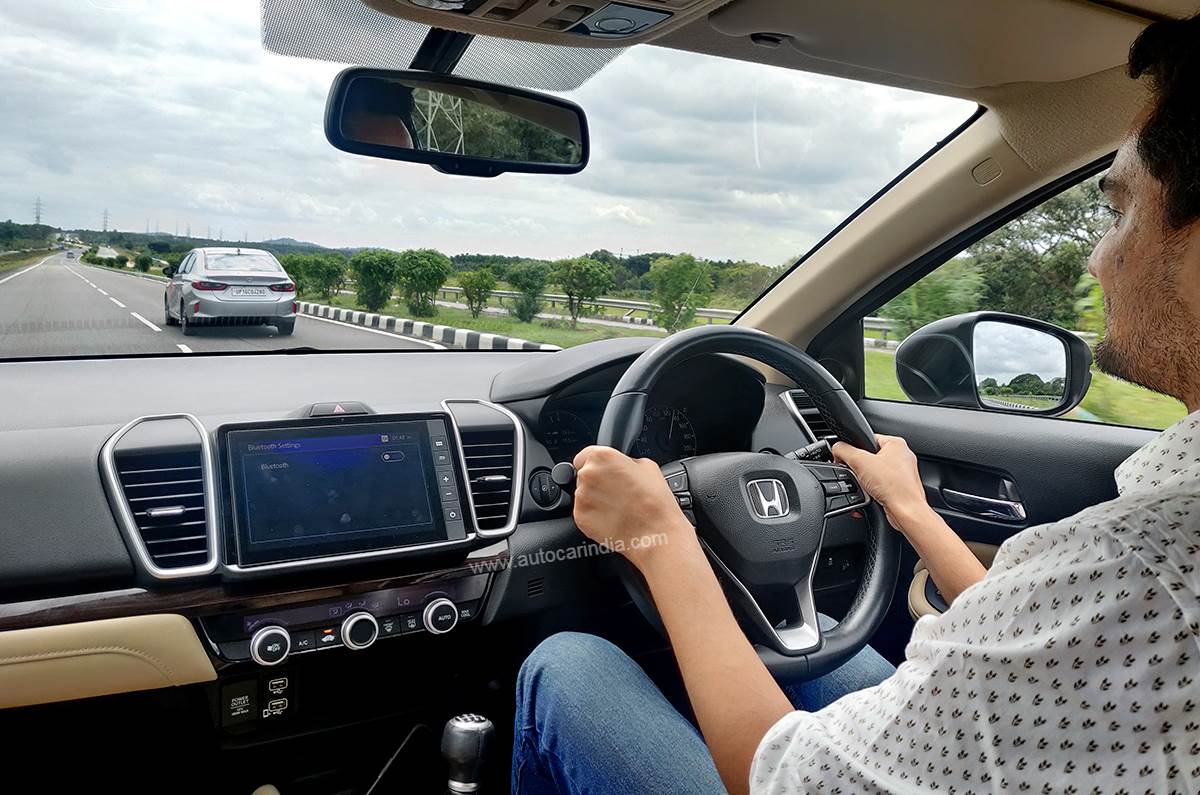 Smooth highways out of Bengaluru allowed for some much-needed, relaxed cruising.

After a few detours that involved moderate traffic and unpaved roads, we finally reached the NH75 highway. This is where the City became an exceptional cruiser after being slotted into sixth gear, allowing my co-driver and me to bond over Formula One and a bag of snacks provided by the team. This reminded me of the countless road-tripping shows I grew up watching where the hosts did almost the same thing.

After three hours, we finally turned off the smooth four-lane highway and reached our first stop in the town of Channarayapatna, where we had lunch and switched drivers for the next leg of our journey. It was mid-afternoon when we hit the road again, and according to Google Maps, it would take us three hours to reach our last stop, the Windflower Resort at Madikeri. As the roads narrowed down to just single lanes and the sun slowly began to set, we came across stunning scenery that we couldn’t help but make a quick stop to capture. The road towards Madikeri offered quite spectacular views.

Following the sunset was a sudden shower, which made driving on the dimly lit roads a bit tricky. Reckless drivers and oncoming traffic with high beams weren’t helping our case either. The rather off-road-esque trail tested the City’s ground clearance to its limits before we finally made it to the gorgeous Windflower Resort at 8pm.

Having woken up nice and early, my co-driver and I met for breakfast, excited about the fact that we were getting behind the wheel of the City Hybrid. Never having driven the hybrid before, I looked forward to this opportunity to understand how different it is when compared to the petrol-only City and test its efficiency. An abrupt fuel stop with the convoy, however, delayed us by an hour or so, and this essentially forced me to abandon my plan to test the City eHEV’s fuel efficiency. We had 215km to cover and make it to our lunch stop by 2.30pm, and make it to our 3pm slot for the Muthunga Sanctuary visit. Throughout the drive, I was captivated by the beautiful single-lane roads of Karnataka. After driving for 144km, surrounded by lush scenery and blue open skies, my co-driver and I switched seats. 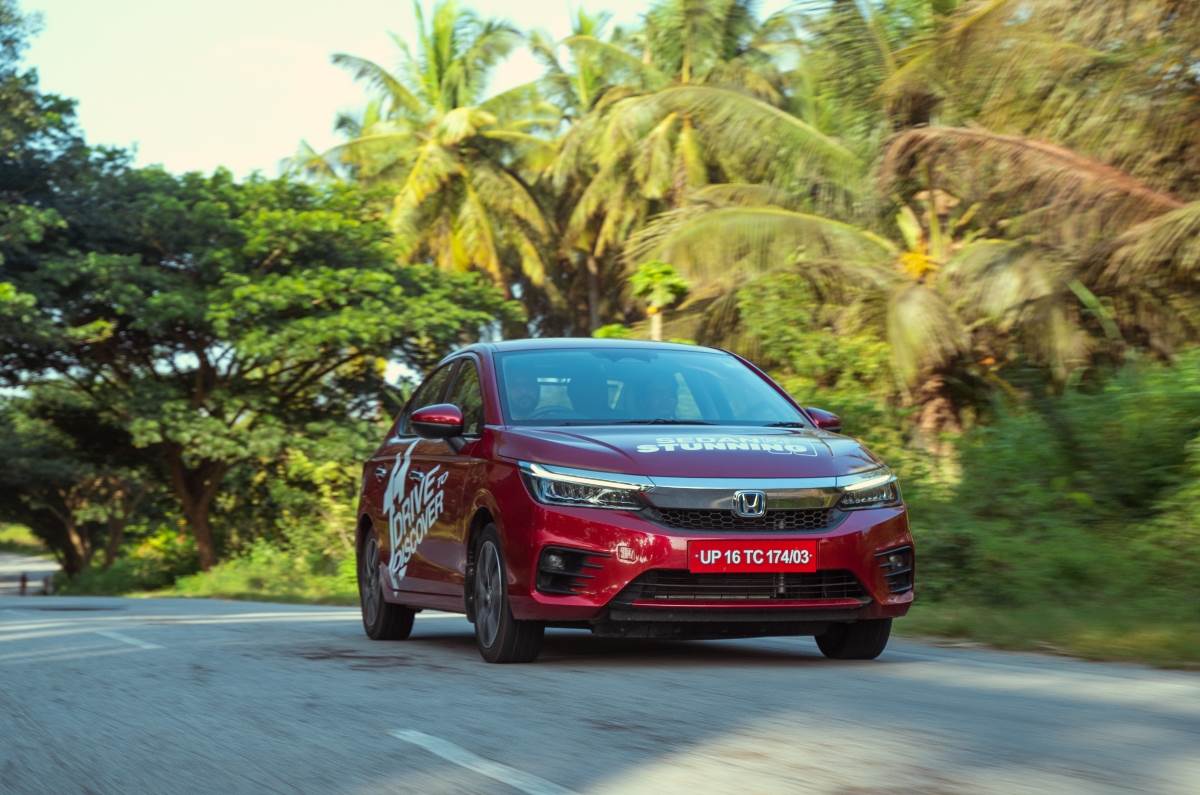 There was seemingly no end to the beautiful surroundings of Karnataka’s roads.

The hybrid was now being pushed even further to cut down on time, sharply dropping the average fuel economy figure from 21.5kpl to 16.5kpl. Despite some unpaved roads along the way and potholes the size of craters, we were seemingly on track to reach our lunch stop on time. However, this is when Google Maps decided to have a mind of its own, directing us on another route, eventually making us stop to ask a local for directions. Thankfully, after being sent on the right path, we swiftly approached Jubilee Restaurant at 2.15pm, where we had a quick lunch before setting off on a 20-minute drive to the Muthanga Wildlife Sanctuary. 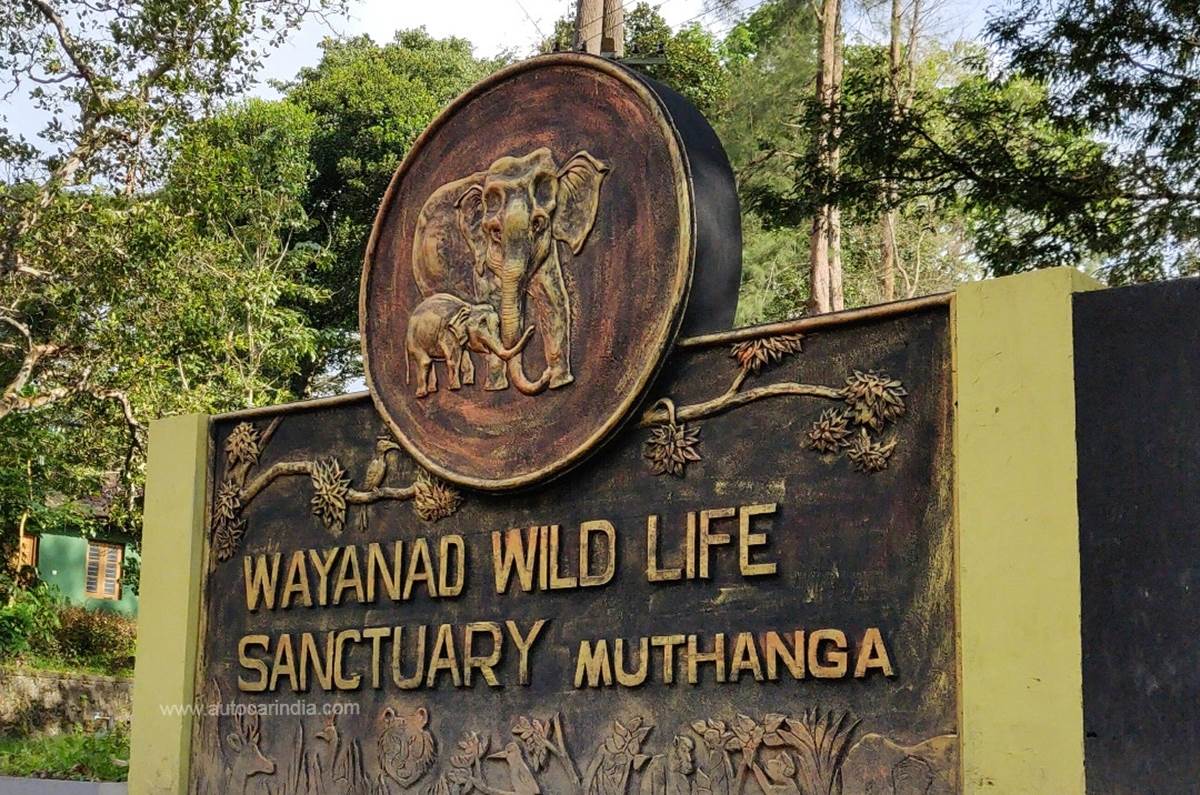 An off-season arrival meant that there were very few animals to be spotted.

We were driven into the sanctuary by forest officials in their old Jeeps. However, the off-season excursion meant that we barely got to see much wildlife, apart from a herd of deer and a few elephants. Post the rather uneventful sanctuary adventure, it was time to swap seats and begin a convoy drive towards our final stop for the day. 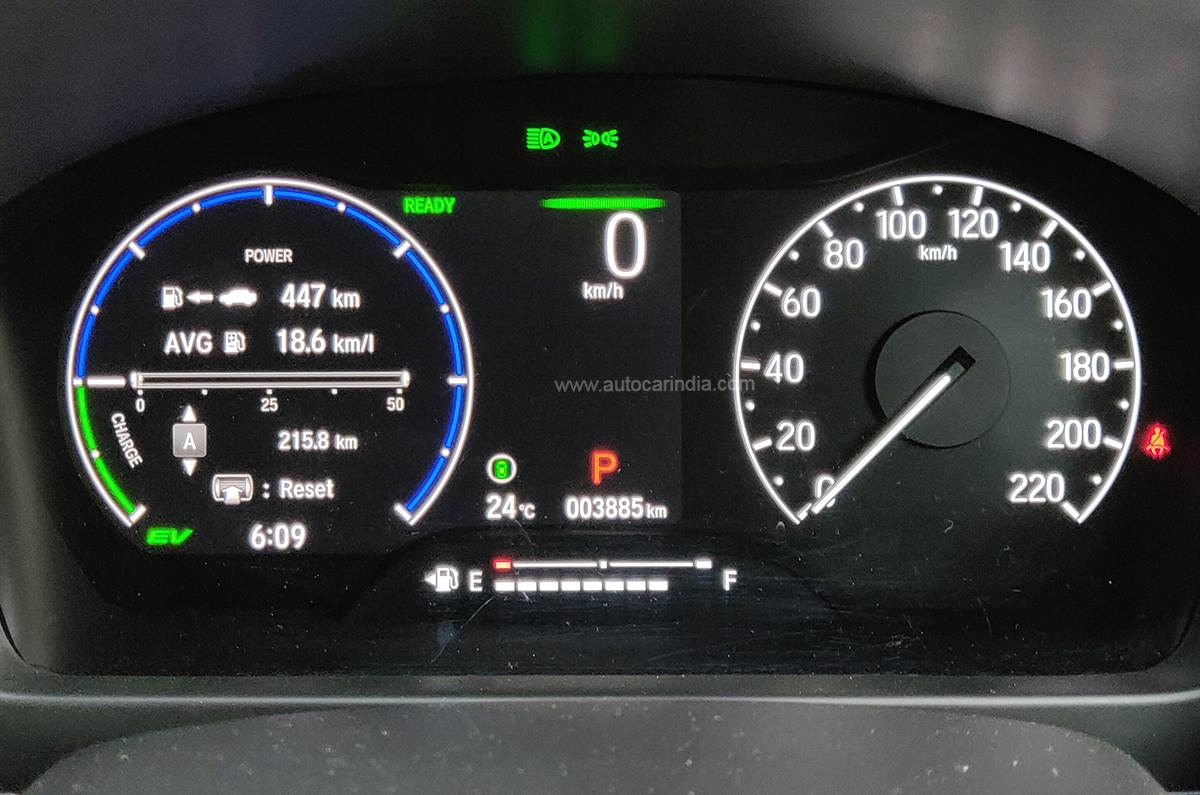 An overall efficiency of 18.6kpl despite a harsh driving style is truly impressive.

Thanks to a set pace of 40kph, the hybrid went about its usual business of running in EV mode as much as it could. As the evening sunlight filtered through the foliage, we had officially entered Kerala and arrived at the gorgeous Saptha Resort and Spa near the town of Sulthan Bathery. This is where the City Hybrid indicated an average fuel economy of 18.6kpl after a total distance of 215km. A truly amazing feat, considering the pedal-to-the-metal driving, and the AC being kept on max for the majority of the drive.

Day 3: Playing catch-up with the Amaze to Kochi

After breakfast at Saptha the next day, we were assigned the Amaze petrol manual for the final leg of our journey. Even though the 90hp, 1.2-litre Amaze was seemingly underrated when compared to the others, I had a feeling that there was a lot more to the car. As we began our 278km journey towards Kochi, it was decided that post-lunch, we would drive along the slightly longer coastal road route to take in some scenic views. The underrated Amaze was the most surprising of the lot thanks to its peppy engine.

The first 144km saw me take the wheel of the peppy Amaze. A good choice in hindsight, as the twisty roads of the Kozhikode-Mysore-Kollegal highway offered spectacular views of the mountains. This is also where the going got increasingly tougher, as the sheer recklessness of local drivers kept us on edge, especially after seeing a scooter rider randomly shift into our lane from the oncoming side. The uphill roads indicated the approach of a ghat, where the already impressive scenery around us went up by another level. 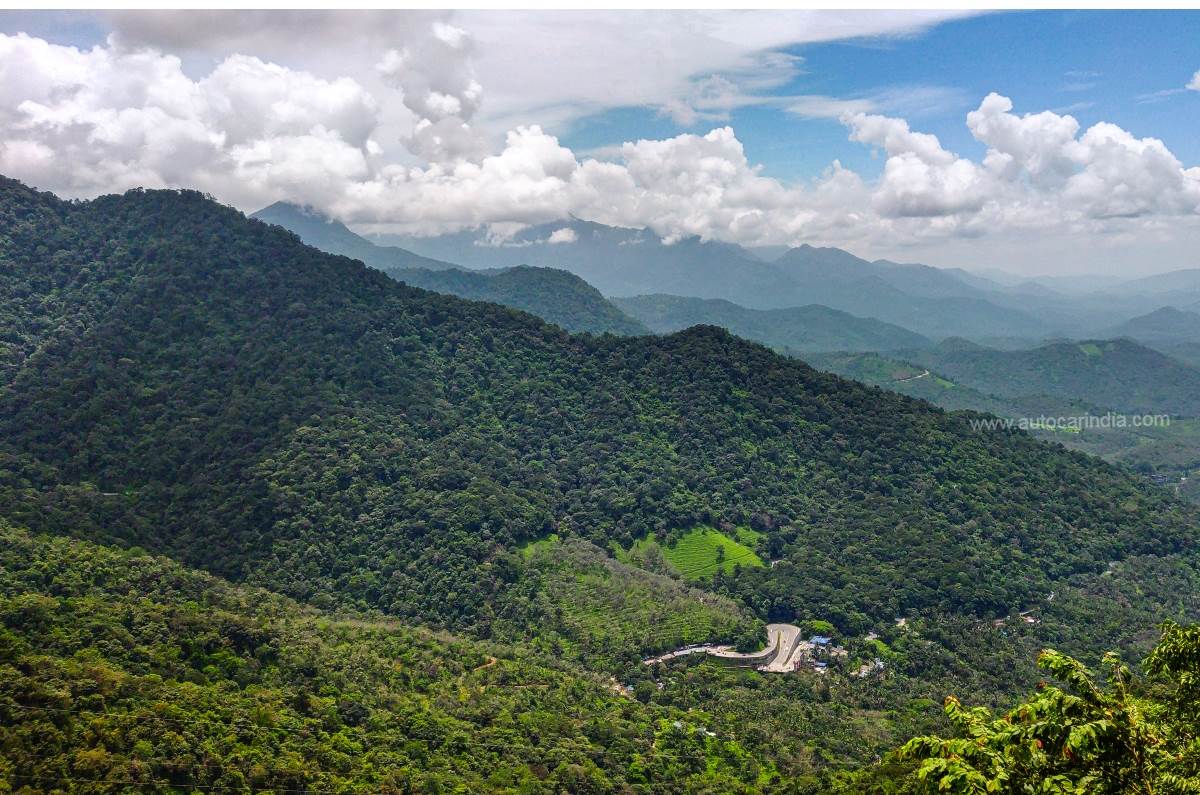 ‘Lakkidi View Point’ took the top spot for the most spectacular sight seen throughout the drive.

The saying that ‘Kerala is God’s own country’ made a lot of sense to me as we reached the top of the Thamarassery ghat and I laid my eyes on the picturesque mountains, open blue skies and the ribbon of tarmac nestled in between them. We had reached ‘Lakkidi View Point’, where it was decided that everyone would drive in a convoy until the eventual coastal road route. Going down the ghat was easily the most memorable part of the drive, courtesy of the spectacular views and the Amaze’s impressive ride and handling. 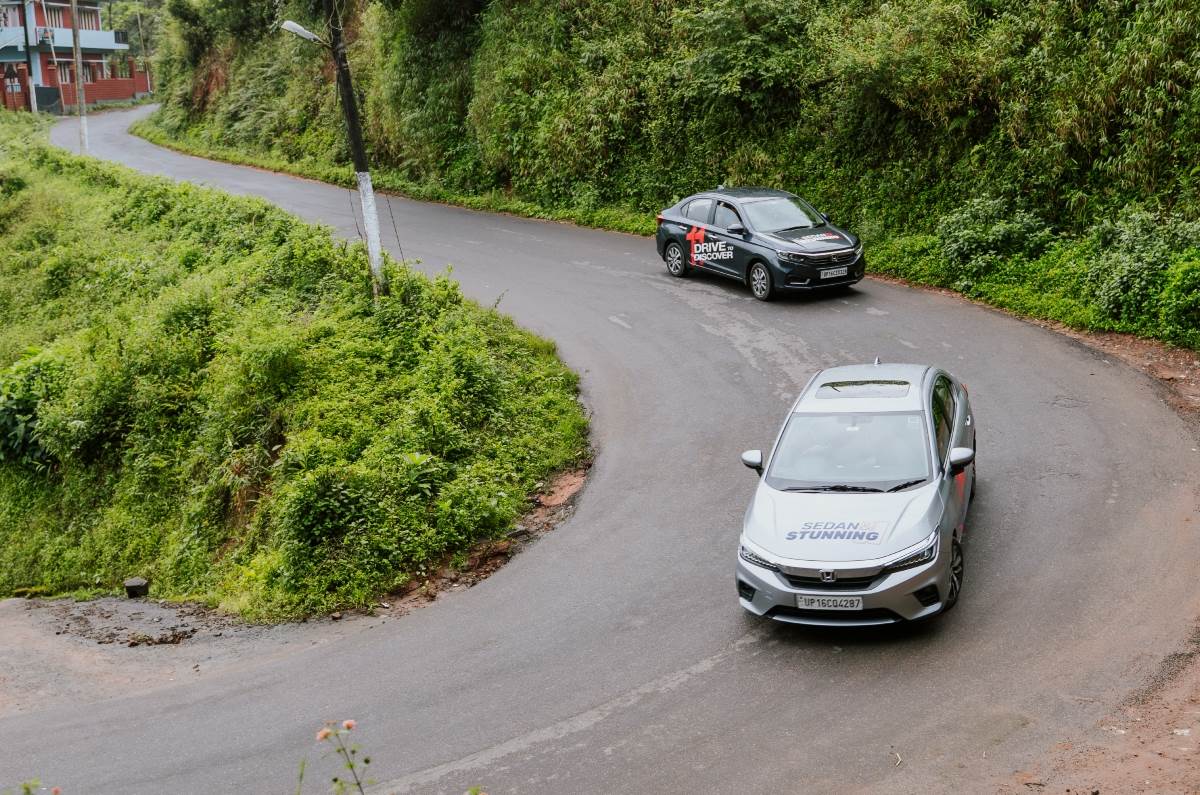 The downhill journey down the Thamarassery ghats was definitely the most fun part of the trip.

Once we were done with the ghats, Google Maps took us through several different bylanes and street roads via small quaint towns. The Amaze’s compact dimensions came in quite handy on the overtly narrow roads. After what seemed like hours, we finally hit the NH766 highway, where it was smooth sailing all the way until the lunch stop.

After my co-driver and I swapped seats for the final time, we were on our way to the fabled coastal road, which promised to offer an amazing view. However, the surprise roadworks and multiple detours threw a wrench in our proceedings, and we had to abandon the coastal route idea. Our saving grace, however, was the picturesque lake where we stopped to grab some refreshments. Stopping for some much-needed refreshments during the lenghty final stretch.

It was now 5.30pm and according to Google Maps, there was still three and a half hours’ worth of driving to be done to reach the Marriott Hotel. The next 134km were the most tiring and long-winded part of the journey, as we came across local drivers who wanted to do anything but let us pass, and oncoming vehicles that had high beams on. We remained calm though, reminiscing about our journey so far and playing music through the rather excellent audio system. At around 9 pm, we reached our destination, finally ending our trip with a heavy heart. 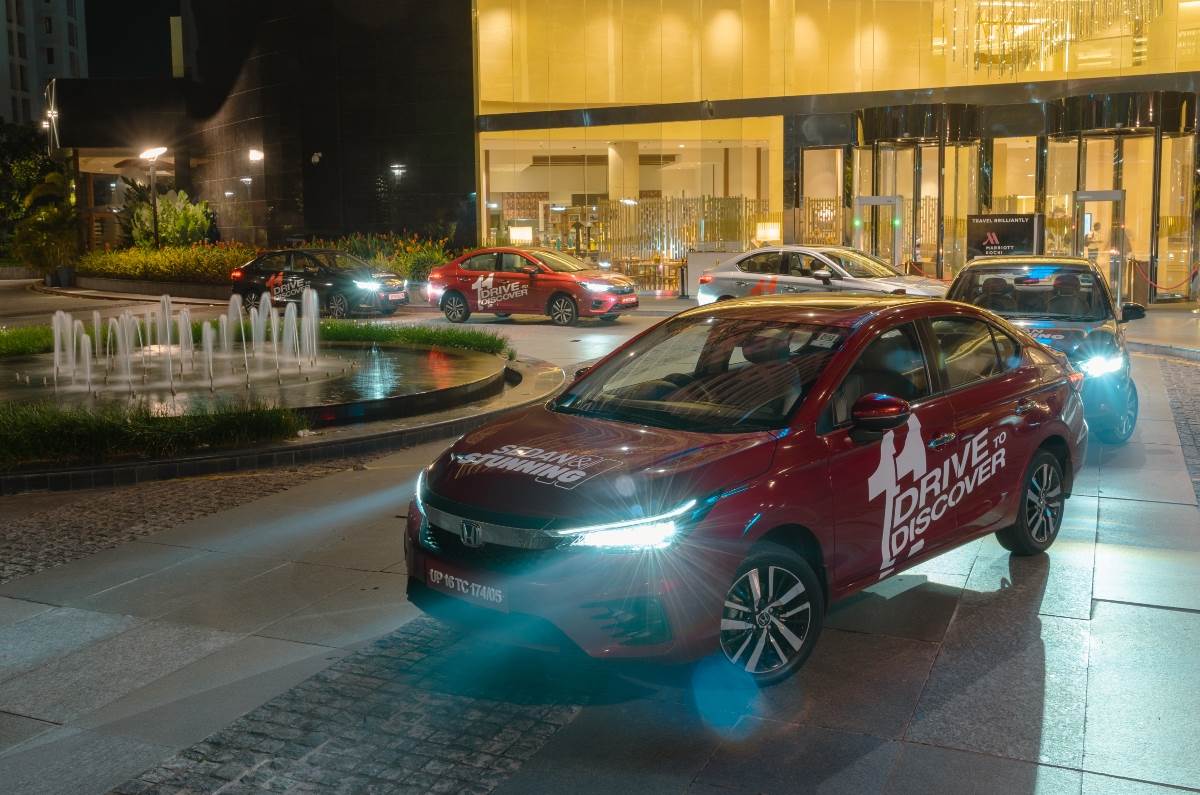 The long and arduous, 7-hour journey of Day 3 came to a close at the Marriot Hotel, Kochi.

Even though it was a bit exhausting, the trip was truly a wonderful experience, with the well-paved highways, the accommodations and the gorgeous countryside views of southern India. The true heroes for me, however, were the sedans, each with their strengths that were highlighted in spades throughout the three-day drive.