Back in BS6 form, the updated CB300R is now locally manufactured.

The Honda CB300R had a brief run in India before it went off sale when BS6 regulations came in. In that time, it became one of the nicest bikes that you could buy, without many people actually buying it. And that’s because the CB300R was sold here as a CKD motorcycle, which meant that it was priced really high. Now though, Honda has relaunched a BS6 version and this bike is locally manufactured.

Better yet, it also gets some small but meaningful changes over the old model.

At first, all that appears to have changed is the paint job, with the CB now getting two new colour schemes. But look a little closer and you’ll see that the design of the exhaust muffler is a little different and the bike now gets a golden coloured USD fork. The LCD display also looks very similar, but it now has a gear position indicator. That’s very helpful on this bike, because it has such short gearing that you will easily find yourself in the top three gears even in city traffic.

As before, Honda has placed the horn switch where you would normally expect to find the indicator button and this will be a non-stop source of irritation. Thankfully, the bike now gets a side stand down engine kill feature which was something we missed on the earlier model.

The 286cc, 4 valve liquid-cooled engine architecture is the same as before, but the engine is now BS6 compliant. Power is now up by 0.6hp for a total of 31.1 horsepower, although this is now produced 1,500rpm higher at 9,000rpm.

Peak torque hasn’t changed, but the bike now gets a slip-assist clutch for its 6-speed gearbox. We’ve also found that the bike sounds a little different, with a deeper, more brappy note coming out of that big exhaust.

The little CB is an absolute blast in the city with its decently light clutch and energetic acceleration. But it can also be calm and relaxed because its super short gearing means you can also lazily ride around at nice low speeds in higher gears. Fuel efficiency is pretty decent as well and our city and highway figures were quite close to each other, which is probably another effect of the short gearing.

Flat out performance is where this bike punches way above its weight. The surge from 6,000-9,000rpm is surprisingly peppy and this bike is quicker than many will expect. Top speed will be somewhere around an indicated 150kph, but the real fun is in the acceleration. The CB shot from 0-100 in under 6.6 seconds in our test, which is way quicker than any other bike that claims this kind of power. .

The big secret to the Honda’s fun performance and super agile nature is the weight. At 146kg, it’s actually 1kg lighter than before, which makes it exactly the same as a TVS Apache RTR 160 4V. To give you a sense of perspective, the latest generation KTM 250 Duke weighs well over 160kg and that’s without fuel. That means this bike is nearly 30 kilos lighter and that’s incredible.

While this is a rather small looking bike, Honda has done a great job with the rider ergonomics. Short riders will like the 801mm seat height, but tall riders will also appreciate the spacious seat and a foot peg position that is sporty, but not horribly cramped. 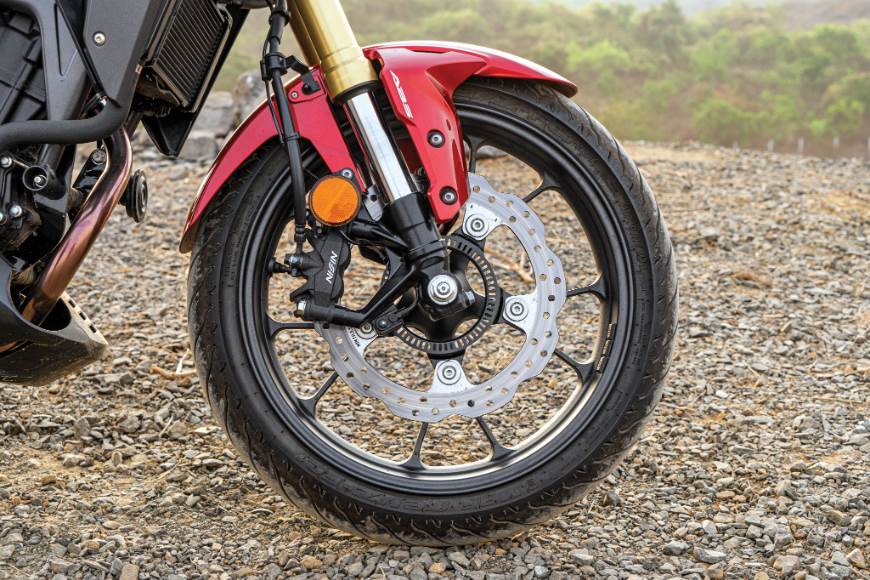 The international spec CB gets a new Showa Separate Function Big Piston upside down fork, but the fork on the Indian model is made by Endurance. That certainly doesn’t sound as fancy, but in reality, this bike’s suspension is very nicely balanced between sportiness and comfort. The bike does have a firmly damped feel, but it also deals with rough roads quite well and the overall set-up felt very good for what this bike is supposed to be. It’s a similar story with the tyres – this bike gets MRF tyres against the Michelins on the BS4 model. But those were the Michelin Pilot Streets, which is a very average tyre and the MRF’s are just as good, if not better.

Overall handling is typical Honda – light, easy and very neutral. It corners with confidence, and even though the bike is very light, it’s high speed manners are decently stable and predictable. The brakes are a similar Nissin set up to the BS4 model, and while the overall performance is good enough, they could do with a bit more initial bite. As before, the bike gets a dual channel ABS system that uses an IMU, or inertial measurement unit, for more accurate performance.

Now that the CB300R has a whole lot more localised content, you would expect that, at the very least, it would cost the same Rs 2.41 lakh as the BS4 model, if not less. Unfortunately though, Honda seems to have taken the same over-priced path as they did with the CB500X and the Fireblade. At Rs 2.77 lakh, ex-showroom, it is more expensive than the TVS Apache RR 310 and the BMW G 310 R, while being only around Rs 10,000 less than the Royal Enfield Interceptor 650 and the KTM 390 Duke.

And that means that our conclusion today will be similar to what it was three years ago. This is a very nice motorcycle and I suspect that many people will find it to be a sweeter machine than its rivals. But you still have to be willing to pay an unreasonable amount of money for it. The only hope is that Honda has in the recent past corrected the excessive pricing for some of its bigger bikes, and hopefully that will soon happen here as well.