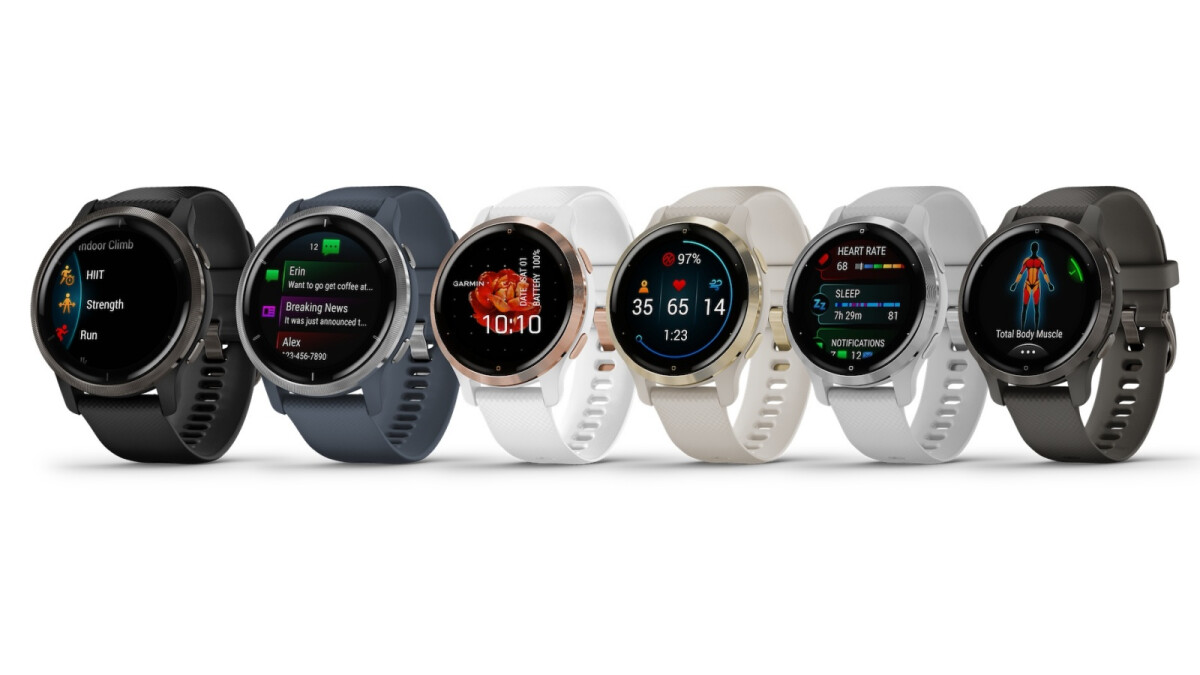 One of the reasons why that happened may have something to do with the somewhat advanced age of the company’s primary mainstream Apple Watch alternative. Released back in the fall of 2019, the decidedly premium-looking and feature-packed Garmin Venu is finally receiving a direct sequel after the introduction of a lower-cost, square-shaped variant roughly seven months ago.

Sleek and robust designs and an impressive health monitoring arsenal

Just like the OG Venu, these second-gen smartwatches are focused on bringing the best of the fashion and fitness worlds together, blending an elegant circular design with one of the wearable industry’s undoubtedly greatest sets of activity tracking tools.

While beauty is certainly in the eye of the beholder, we can probably all agree the Venu 2 family includes some of the prettiest timepieces in the world (that don’t cost a small fortune), with a fiber-reinforced polymer case, stainless steel bezel, and quick release silicone straps available in a wide array of hues striking what looks like a near-perfect balance between style and durability.
READ  Russell Westbrook breaks the NBA record for triple-doubles, surpassing Oscar Robertson

Naturally, the Garmin Venu 2S is the way to go for folks with smaller wrists, who might prefer a slightly thinner, lighter, and overall more compact device, but at 12.2mm in depth and a weight of 49 grams, the standard Venu 2 is not particularly bulky either.

Compared to their forerunner, the Venu 2 and 2S are adding sleep score and insights technology powered by Firstbeat Analytics to try to catch up to several of the world’s best smartwatches right now, including Samsung’s Galaxy Watch 3. Fitness age is another interesting novelty, estimating your body’s “age” based on factors like daily activity levels, resting heart rate, and BMI.
Then you have new activity profiles for things like indoor climbing and hiking, enhanced strength training profiles, and a neat feature called Health Snapshot, all of which are meant to expand a list of capabilities also including general 24/7 heart rate, blood oxygen saturation, all-day stress, hydration, Body Battery energy, and women’s health monitoring.

Can the stellar battery life make up for the key missing features?

Although Garmin claims the Venu 2 Series comes with the “broadest range of 24/7 health monitoring” tools around, that’s… not exactly true. Or rather it might be technically true, but when it comes to potentially life-saving features so many customers seem to care about these days, there are at least two big ones missing.

We’re talking about ECG monitoring and fall detection, which puts the Venu 2 and 2S at a major disadvantage compared to the Apple Watch Series 6, Samsung Galaxy Watch 3, and even the Fitbit Sense (at least as far as FDA-cleared ECG technology is concerned).
READ  Realme C12 (Power Blue, 3GB RAM, 32GB Storage) Without Offer

The otherwise feature-packed Garmin Venu 2 lineup also offers no optional cellular support while obviously rocking a built-in GPS chip and allowing you to download and play music directly on your wrist via services like Spotify, Deezer, and Amazon Music.

The sharp and bright AMOLED display equipped with optional always-on capabilities is without a doubt one of the Venu 2’s standout features, but the battery life actually looks like one of the few things that could convince some people to choose one of these two round-faced bad boys over the competition.

READ  Within CDC, there's debate about how to best advise Americans on masks

If you thought the original Venu was impressive from that standpoint, keeping the lights on for up to five days on a single charge, the Venu 2 and 2S absolutely smoke their predecessor, standing tall at endurance ratings of up to 11 (!!!) and 10 days respectively in “smartwatch mode.”

In contrast, Apple can merely promise its hugely popular Series 6 will last up to 18 hours between charges, while the Samsung Galaxy Watch 3 is supposed to improve that to “up to two days.” Of course, the real-life experience of everyday users doesn’t always line up with those “official” numbers, but even if the Venu 2 turns out to be half as impressive as Garmin claims, that would still leave virtually all of its rivals in the dust.

Share. Facebook Twitter Pinterest LinkedIn Tumblr Email
Previous ArticleApple TV 4K 2021 vs Roku vs Chromecast vs Amazon Fire price and streaming
Next Article Is 128GB enough for iPad Pro 2021? Which storage option should you get?