Maruti Suzuki reiterates its focus on the commercial segment with the ‘Tarakki Aapki Saath Hamara’ campaign that builds on the ability of its commercial vehicle range to meet day-to-day business challenges at different touchpoints.

Maruti Suzuki forayed into the commercial segment in 2016 with its first commercial vehicle, Super Carry. The foray also marked the roll-out of the Maruti Suzuki Commercial Channel and since then, the brand has gone from strength to strength.The powerful mini truck has empowered more than 100,000 owners with customised experiences in line with their versatile business needs and the commercial channel has not only strengthened its reach across the length and breadth of the country, but also touched the lives of its ever-widening customer base.

Maruti Suzuki’s development of the Super Carry for India as well as its decision to venture into the commercial space had its roots in three fundamental reasons. First, the vehicle had proved its mettle in Japan’s competitive commercial space, fortifying Suzuki Motor Corporation’s expertise in the segment, and the Carry was part of that lineage. Second, a syndicated research showed that demand for light commercial vehicles would go up with the emergence of e-commerce. Thirdly, the company’s internal study revealed that nearly half of its customers were businessmen, small traders, or self-employed and Maruti had already established a relationship of high trust with these customers.

As a result, the Super Carry was designed and developed basis detailed research and understanding of customer requirements. It offered the best of both the worlds –power and strength as well as carrying capacity and also addressed the need of stability, ride and handling and fuel efficiency. The Super Carry is the country’s first 4-cylinder powered mini-truck, delivering up to 54kW@6000rpm of power and 98Nm@3000rpm of torque, ensuring a smooth pickup. With shorter turnaround time, more trips and more savings, the mini truck has proven to be an ideal product for SCV customers.

Journey of the Commercial Channel

As Maruti Suzuki’s Commercial Channel completes five years, it’s interesting to look at its journey and how it has effectively catered to its customers’ business needs.

What started as a pilot in three cities — Ahmedabad, Kolkata and Ludhiana, in 2016 with the launch of the Super Carry — soon became one of the fastest growing automobile retail channels in the country, crossing 100+ outlets in 2017, 250+ outlets in 2018 and over 300 in 2019, enabling its customers to always be on the move in life and in business. 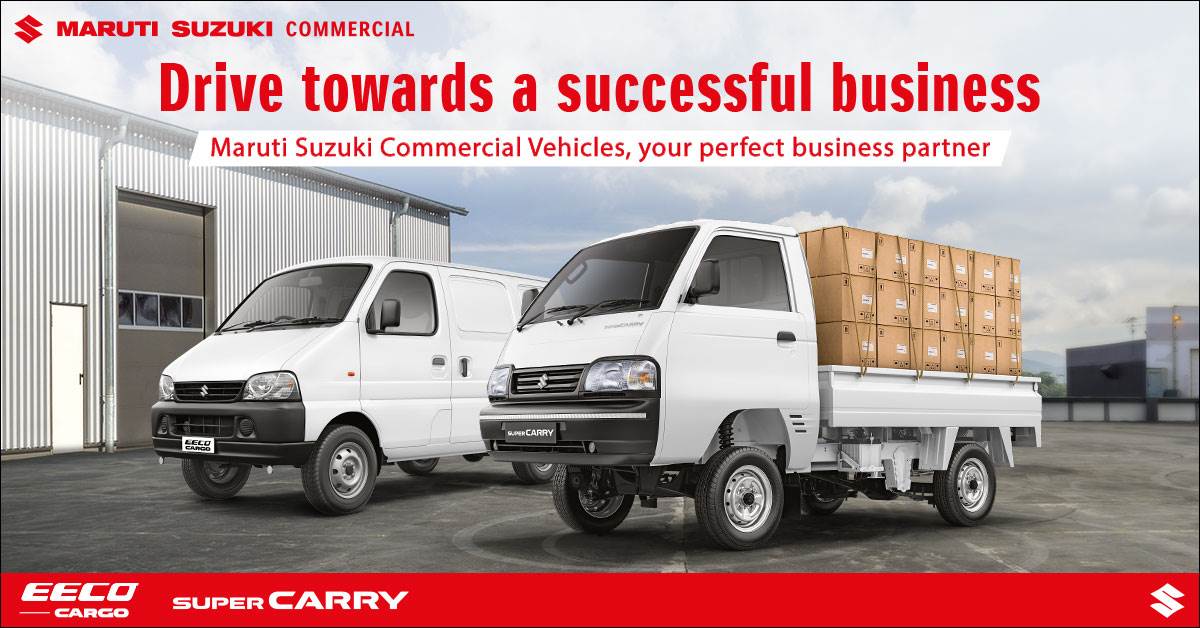 Over the years, Maruti has continued to expand its offering under the Commercial Channel, ensuring that the channel serves as a one stop solution for all commercial needs of its customers. In 2019, Maruti’s versatile van, the Eeco Cargo, was offered through the channel and in 2020, the commercial network portfolio saw the addition of the extensive Tour range of vehicles, Tour H1 (hatchback), Tour S (sedan), Tour V (van) and Tour M (MPV). In 2020 Maruti also launched a BS6 compliant S-CNG variant of the Super Carry, in line with the company’s Mission Green Million.

The extensive range is sold through Maruti Suzuki’s 340 commercial outlets spread across more than 230 cities in India. The Commercial Channel is backed by a wide service network of more than 3,800 Maruti Suzuki service centers across India.

The Commercial Channel has registered strong sales with overall volumes since inception at 1.25 lakh+units till January 2022, including 1 lakh+ units of the Super Carry, which has received a phenomenal market reception and a wide acceptance among customers. In fact, it is the second best-selling mini truck in the less than 2 tonne LCV segment.

The expanding Commercial Channel network is testimony to Maruti Suzuki’s focus on customer satisfaction and establishes its expertise in understanding the needs of the customers. The customer-first approach has contributed to mass acceptance of the brand, resulting in a 3X growth in network since 2017.

At the start of 2022, Maruti Suzuki Commercial launched ‘Tarakki Aapki, Saath Hamara’, a 360-degree media campaign to celebrate the channel’s success. Aimed at positioning the brand as an expert for growth and a reliable and trustworthy partner to guide customers in their decision-making, the campaign highlights the transformative ways through which Maruti Suzuki Commercial is offering products that help customers succeed.

Maruti’s first-ever brand campaign for its commercial channel comes at a time when India’s commercial segment is seeing a revival.With the commercial vehicle space expected to grow further during the year, the campaign sharpens the focus on the drive of customers in this segment to be financially successful and socially recognized. Leading actors Aparshakti Khurana and Manav Kaul have been roped in to be the face of the campaign that showcases the day-to-day business challenges faced by customers and the solutions offered by Maruti Suzuki Commercial at different touch points.For instance, the customer’s need for a wider range of commercial vehicles to suit growing business needs is fulfilled by Maruti’s diverse portfolio (goods & passenger).The customer’s concern for vehicle support is easily allayed by Maruti’s wide service network spread across 2000+ cities, including in remote areas and the fact that its commercial vehicles can be serviced at any of the Maruti Suzuki service centers. A third party finance option is aimed at significantly easing the customer’s financing burden and the requirement for a powerful engine is met with the Super Carry’s powerful 1.2L unit that provides a smooth ride, even with heavy loads, leading to profitability.

The Commercial Channel customers include the ‘owner-cum-driver’ whose primary need is to get a stable income and the vehicle acts as a source of livelihood for him as well as for fleet owners.The campaign ‘Tarakki Aapki, SaathHamara’ dives deeper into understanding the commercial customer’s innate requirements and showcases how Maruti Suzuki can support them in their quest for increased productivity, improved earnings and expansion of their business.