The facelifted BMW X3 SUV and X4 SUV-coupe have been revealed ahead of their global market launch that’s set for later in the year. The mid-cycle facelift brings with it updates to the styling, equipment, along with a line-up of mild-hybrid petrol and diesel engines.

BMW has made design tweaks to the X3 and X4 models,  which includes a revamped, larger kidney grille and new-look headlights.

The tweaks are designed to give the third-generation X3 a more ‘robust’ SUV appearance. The kidney grille has been increased in size, with a new black bar to give it more visual separation. The headlights are flatter, with full-LED as standard and BMW’s Laser Light system available as an option. The SUV also gains a new front apron, raised underbody protection and window graphics and roof rails finished in aluminium. The rear styling has been reworked with larger exhaust pipes and narrower rear lights.

The styling of the X4, meanwhile, has been reworked to emphasise its more ‘sporty’ coupe-esque profile. That includes the revised grille, and a revamped rear design.

Both models will be offered in M Sport trim, which adds a mesh kidney grille with black gloss surrounds, along with extra gloss exterior trim and M Performance aerodynamic styling. 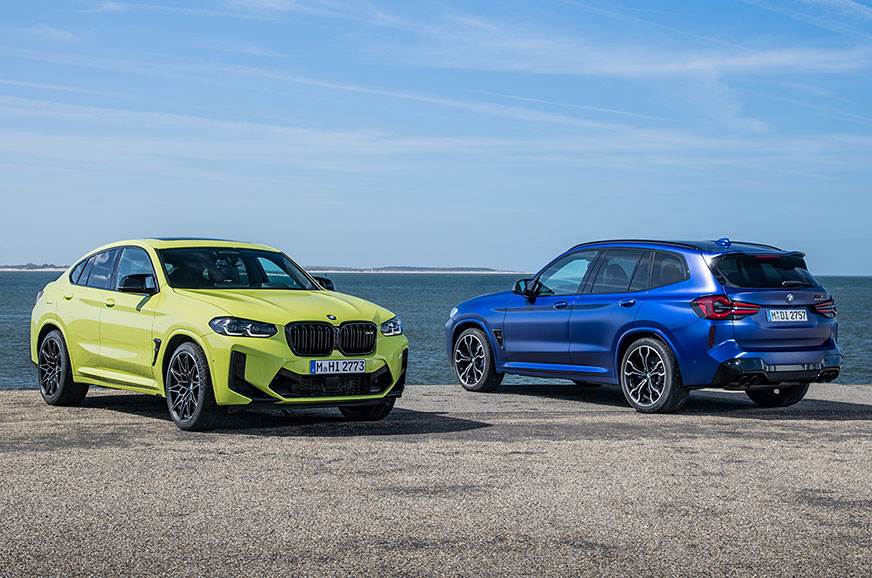 The range-topping M Competition models get M-specific styling elements such as a one-piece frame version of the enlarged kidney grille, featuring the frame finished in gloss black, bespoke M Competition side air intakes that are framed with high-gloss black elements, and a revamped rear spoiler. The models also feature a revised rear apron that has a new design shaped like a “large anvil” and twin, black chrome exhaust pipes.

The performance models sit on new, forged 21-inch wheels, which BMW claims save 2kg of weight per wheel.

Starting with the standard X3 and X4, the interior styling has been revamped with a revised centre console in line with the 4 Series. The centre console continues to be crowned by a new free-standing touchscreen ranging up to 12.3-inches in size with revised control surfaces lower down. The M Competition models, meanwhile, feature sports seats as standard and also get the ‘control island’ used in the M3 and M4. Also, part of the package is BMW Live Cockpit Professional, which is based around two 12.3-inch digital displays. A Harman Kardon surround-sound system is also standard.

The updated X3 and X4 M Competition models also get BMW’s Driving Assistant Professional system for the first time. It will be offered as an option and includes features such as Active Cruise Control and parking assist.

The big change mechanically to the standard X3 and X4 is the inclusion of hybrid technology as standard across all engine options. The petrol and diesel line-up for both models has been revamped with 48V mild-hybrid technology, while the previously available plug-in hybrid also carries forward on the X3.

Both, the X3 and X4 get a choice of three diesel engines – a 2.0-litre, four-cylinder developing 190hp (20d) and a larger 3.0-litre, six-cylinder mill putting out 286hp (30d) and 340hp (M40d). Moving to the petrol line-up, both SUVs will be offered with 2.0-litre four-cylinder and 3.0-litre six-cylinder engine options – the former in varying states of tune. The entry model will be the four-cylinder 20i developing 184hp, the more potent 30i using the same engine but developing 245hp, and the range topping M40i will pack in a 360hp, six-cylinder turbo-petrol mill.

The X3 will also be available with a plug in hybrid – the 292hp xDrive30e – which can complete up to 50km of electric-only running.

As standard, the X3 and X4 use BMW’s all-wheel-drive technology, which is rear-drive optimised in an effort to offer typical BMW handling; all engines are paired with an 8-speed automatic gearbox.

For the range-topping M Competition versions, BMW has made tweaks to the 3.0-litre, in-line, six-cylinder, twin-turbo petrol engine. Although peak power remains at 510hp, the addition of the lightweight crankshaft used for the M3 and M4 models, along with a revamped cylinder head core, has allowed BMW to increase the torque by 50Nm, to 650Nm.

The X3 and X4 M Competition both retain an 8-speed torque-converter automatic gearbox, along with a rear-biased all-wheel-drive system.

Adaptive M Sport suspension is standards on both models, with electronically controlled dampers used to increase ride comfort by reducing wheel and body movements. That combines with the M Servotronic steering and Dynamic Stability Control (DSC), and BMW has added an M Dynamics Mode that allows for extra wheel slip to enable on-track drifting.

Coming to the Indian market, BMW is expected to bring the updated X3 and X4 to India sometime later this year. Also expected to arrive this year is the facelifted BMW 5 Series, which made its international debut last year. Moving to the carmaker’s performance models, the carmaker has confirmed the launch the X3 M40i in India, though this could likely arrive with the facelifted model. Also on the cards is BMW’s full-blown M3 and M4.