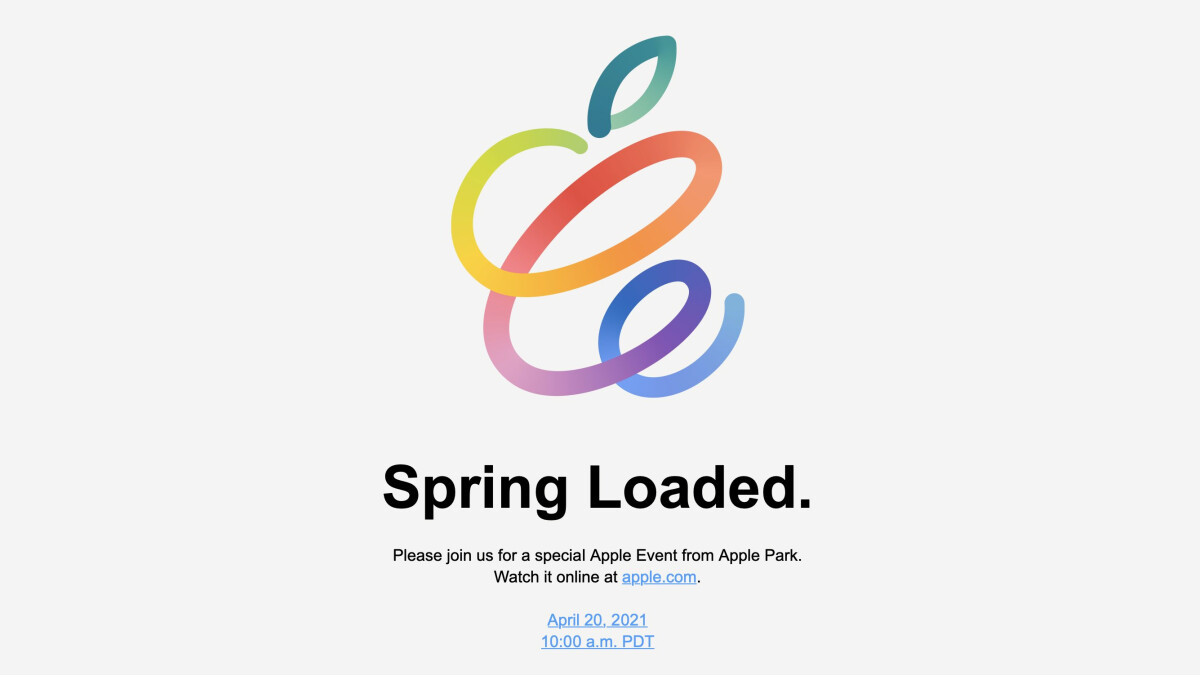 How and when to watch Apple’s April 2021 event

The ‘Spring Loaded’ press conference is scheduled for Tuesday, April 20. Like recent special Apple Events, this one will be pre-recorded and streamed through Apple’s official website on support browsers, the Apple TV app, and the video embedded above.

It starts at 10am PDT / 1pm EDT / 6pm BST and should run for around one hour, although the exact runtime hasn’t been revealed. In terms of announcements, Apple is expected to introduce several new products including a new iPad Pro and AirTags.

What to expect at the April 20th Apple event?

The most important product rumored to be making an appearance at the April Apple event is the next-generation iPad Pro (2021). The 12.9-inch model is said to feature a more advanced mini-LED display, while the 11-inch version will stick to Apple’s usual LCD panel.Significant design upgrades are unlikely, so expect the iPad Pro (2021) models to look almost identical to the current iPad Pro (2020) line.

READ  The best car phone holder for your phone

The good news is that Apple’s said to be planning some big internal improvements. The upcoming A14X Bionic chipset, expected to offer M1 MacBook-like performance, is on the cards alongside optional 5G connectivity and stylus support — check out the best Apple Pencil alternatives.

There have also been reports of an updated USB-C port that supports the Thunderbolt standard, something Apple has typically reserved for its line of Mac products but that would enable compatibility with a wider range of peripherals.

Apple’s item tracking tags — AirTags — have been in development for years and faced several delays. The brand promoted third-party alternatives last week, but rumor has it that they could finally be announced at the April 2021 event and be priced at $39 in the US.Like Samsung’s Galaxy SmartTag+, Apple AirTags are expected to use a combination of Bluetooth Low Energy (BLE) and Ultra Wideband (UWB) tech to enable a more accurate tracking experience while respecting user privacy.

Apple has been working on iOS 14.5 for months. In a recent interview with The New York Times, Tim Cook said the update was only “a few weeks” from being released, so there’s a good chance the release date will be announced at the April event.

In terms of features, the most important once is App Tracking Transparency. The privacy-focused feature, which has been heavily criticized by Facebook, gives users the option of stopping apps from tracking them across third-party apps and websites.

The second-generation AirPods were introduced in March 2019, so an upgrade is due soon. Whether AirPods 3 will be announced at the April event or in late 2021 is unclear, though.

Regardless, the next-gen AirPods should offer an updated design that retains the universal tip design and introduces shorter stems inspired by Apple’s pricier AirPods Pro.

Improvements to the audio experience and battery life could be coming too, although active noise cancellation is unlikely to make the cut.

The current Apple TV 4K was announced in September 2017 and uses outdated hardware like the A10X Fusion chipset. A new model with a potentially redesigned remote is in the works, and there’s a good chance it could debut at this month’s Apple Event.

It could be powered by the A14X Bionic, like the iPad Pro (2021), and focus on gaming — the latest rumors suggest it’ll support 4K 120Hz gaming — as part of Apple’s desire to push its Apple Arcade subscription service.