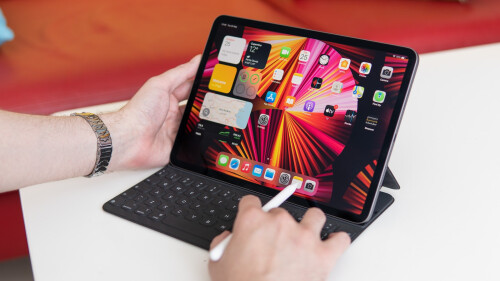 You may also find interesting:

Initially, several reputable sources had claimed that the 2021 iPad Pro might come out “as early as April”, which held true. Apple hasn’t been as consistent with its iPad Pro release dates as it is with iPhones, but the predictions were correct and the 2021 iPad Pro was announced on April 20, 2021.

The new M1 iPad Pro can be pre-ordered starting April 30, while shipping begins in the second half of May. Precise shipping dates are yet to be announced.

The new M1-powered iPad Pro comes in two sizes and the base price for each one is as follows:

The 2021 iPad Pro is virtually unchanged from its predecessor in terms of design. It features the same modern build with minimal symmetrical black bezels surrounding the display. It once again also comes with quad speakers, two on each side, a USB Type-C port (now supporting Thunderbolt), keyboard and Apple Pencil connectors, the same camera module with slightly improved dual cameras, and the same LiDAR sensor.

As was most greatly anticipated and rumored, the new 2021 iPad Pro (only the 12.9-inch variant) sports a display that uses mini-LED technology, dubbed Liquid Retina XDR. This new technology improves the display’s contrast ratio and brightness, plus reproduces deeper blacks, making it a closer competitor to AMOLED than any previous iPad models. The iPad Pro also features a super-smooth 120Hz screen refresh rate like its predecessor.

As the iPad Pro’s size didn’t see any changes from last year’s model, it’s still compatible with prior iPad Pro cases and accessories, most notably the Magic Keyboard and Smart Keyboard Folio. The 2021 iPad Pro also supports the Apple Pencil 2 and has a magnetic docking spot for it just like last year’s iPad Pro and the iPad Air 4.
READ  Motorola's One Hyper is getting updated to Android 11

The 2021 iPad Pro’s rear camera module now holds a 16MP ultra-wide camera along with the expected main camera, LiDAR sensor and flash. The tablet’s front camera has been upgraded to 12MP and comes with a new software feature called Center Stage. That feature allows for better video conferencing by focusing on a subject and keeping them in the middle of the frame even if they’re moving around.

The 2021 iPad Pro models will be coming with iPadOS 14 out the box, to later be updated to iPadOS 15, likely in November. iPadOS 14 introduced better home screen widgets (Today View) to all iPads that support it, and a notable new feature called Scribble. If the user owns an Apple Pencil (2nd-gen, in the case of the iPad Pro), Scribble lets them handwrite into any text field with the Pencil itself, instead of having to rely on the on-screen keyboard. Thus, iPad users can now use their Apple Pencil for almost anything they may wish to do on the iPad.

With iPadOS 14 also came new security features, with the most notable ones surrounding the Safari internet browser for iPad. Safari can now inform the user of weak passwords, while the App Store now shows privacy information to the user, such as what permissions an app requires, before downloading it. Small interface changes were also made to built-in apps such as Files, better adopting the use of sidebar menus for better navigation on the large screen, thus making the iPad feel more like a computer, instead of just a larger iPhone.